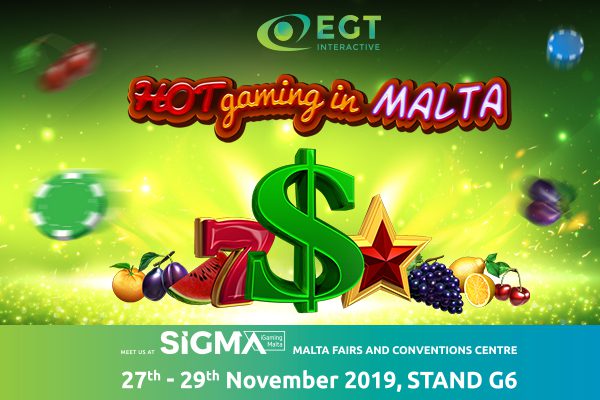 EGT Interactive continues its presence on the igaming market and this year is a gold sponsor of the SIGMA expo in Malta.

The 2nd edition of the event will take place at Malta Fairs and Conventions center between 27th and 29th of November. EGT Interctive will be at stand G6.

Todor Zahariev, chief executive of EGT Interactive, said “We are thrilled that on this strategically important event, EGT Interactive will fascinate the visitors with a few novelties. The tradition to present our top-notch portfolio on contemporary and innoivative stand will be respected and we are going to surprise the audience with a brand new stand design in this direction. Again it is in line with the visual concept of the HOT games category. Of course, we will also pay enough attention to our new products, and one of them will surely catch everyone’s attention: te bonus game Egypt Quest.

“[Egrypt Quest] has been one of the most successful games in the land based operations, which makes it known to our fan base. We believe that it will have overal high success ratio with all our operators and we already have the necessary data backing up this statement, as during the first month of its release, it has already aligned in the top 20 of EGT’s best performing titles.

“It is a new approach to 6 of our most successful titles, with high return to players strategy and two levels of winning, giving players higher retention rate and the possibility of numerous winnings. Egypt Quest still references to some of the top titles from the portfolio but gives the player a chance for double winnings and many special features such as free spins and bonuses. Rise of Ra, Burning Hot, 20 Super Hot, Halloween, Circus Brilliant and Egypt Sky are already familiar to the audience, but are now placed in a separate portal with a new bonus game comprising of 4 Mystery Jackpot Levels.”

Along with the leading headlines like 40 Super Hot, Burning Hot series, Amazons’ Battle, Zodiac Wheel and Shining Crown, the company will show some of its latest proposal: Burning Hot and 40 Burning Hot – which both feature 6 reels – Volcano Wealth, 5 Juggle Fruit, Great 27 and more.