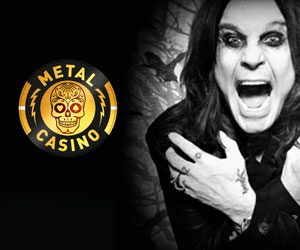 22 February 2018 – MALTA (Press Release): The world's only online casino for hard rockers – Metal Casino – is now boosting its marketing outreach with ambassador and partner Ozzy Osbourne in a unique campaign.

After the casino’s successful launch in August 2017, Metal Casino will now turn up the volume in the UK, with a social media campaign boosted by Ozzy, who acts as a mega influencer through his own channels.

In January, Metal Casino travelled to Culver City, Los Angeles to film some exclusive material with Ozzy, including an extended interview where the legend plays the hard rock games Motörhead, Guns & Roses and Jimi Hendrix while reminiscing about his friends Lemmy, Slash and Jimi. He also introduces us to the legendary Rainbow Room and tells us never-heard-before stories about The Beatles and his guitarists, and recalls crazy casino trips with Motörhead’s Lemmy.

The half-hour long interview will be divided into five episodes, which will be released separately through social media channels. In these episodes Ozzy will be giving away signed prizes to lucky lottery winners.

The campaign will reach its peak this spring and summer when Ozzy is touring.

“We are absolutely delighted by the results,” said Metal Casino’s Clas Dahlén. “The recordings with the quick, witty and super-professional Ozzy became an epic rock documentary with elements of casino gaming.

“The interviews will be a perfect vehicle for reaching out to music and gaming fans. Metalheads will be wowed by Ozzy’s personal memories from the history of rock that have never been told before, and hopefully they will go viral on social media.”

“This spring's campaign with Ozzy, together with our new Metal Casino Live stream on Wednesdays and Fridays, will increase the brand awareness and strengthen our three promises: True, Relevant and Dedicated, and boost customer influx even more,” added Dahlén.

Metal Casino – All in for the fans!

Metal Casino is owned by VRTCL Gaming AB and is the world’s first casino that embraces Metal music fans and casino lovers. Players will be able to win Metal merchandise, concert tickets, meet bands backstage and more. Launched in 2017, its founders have spent over 30 years working in the most successful music, gaming and tech companies in the world, including Mr Green, Universal Music, EMI, Spotify, Microsoft, and Apple iTunes.

Metal Casino is set for an international launch in the UK, Germany, Sweden, Norway and Finland. Communication will be only in the “universal language of Metal”, English.