With nominations for iGB’s Most Influential Women 2020 now open, iGB catches up with those who made last year's Top 10 to find out what they’ve been up to since, as well as get their views on who deserves to feature this year. 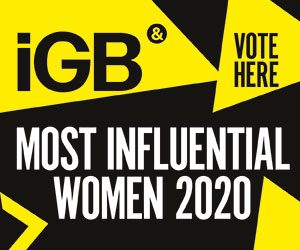 With nominations for iGB’s Most Influential Women 2020 now open, iGB catches up with those who made last year's Top 10 to find out what they’ve been up to since, as well as get their views on who deserves to feature this year.

When we launched this year’s survey, we published an article listing some of the industry’s high-fliers of the past year to get people thinking about who they might like to nominate.

Shortly afterwards, All-In Diversity Project co-founders Christina Thakor-Rankin and Kelly Kehn reminded us that we should also look beyond the big names – an especially important point given the chaos that’s been caused by the pandemic.

This week we caught up with some of the women who made last year’s list to find out what they’ve been up to since, and also get their tips on who they think should feature on this year’s list.

A steady field
Compared with the group who featured on our inaugural list, there have been relatively few big professional changes among last year’s Most Influential Women.

The most significant was the announcement late last year that Mandy Ross was stepping down as chief information officer of Tabcorp.

After overseeing the huge technology integration project that followed the Tabcorp-Tatts merger, Ross left the gaming sector to take up a role at Griffith University in Brisbane in April.

The remaining nine women featured remain with the same companies they were at when the list came out, although at DraftKings Jamie Shea has recently been promoted to vice-president of sportsbook operations.

But just because last year’s Most Influential Women haven’t moved about much doesn’t mean they haven’t been faced with new challenges.

At Michigan Lottery, for example, Shannon DeHaven says that due to the pandemic, her role as deputy director of digital operations has changed significantly over the past five months.

“Expanding the team's autonomy to keep up with the online demands has encouraged a new level of creativity, both in regards to online instant games development as well as CRM and marketing ideas. This in turn has also set new net gaming records that contribute important funds to our good cause, Michigan K-12 Schools, in a time when financial support for schools is needed more than ever,” she explains.

Kindred’s chief experience officer Britt Boeskov, who had also joined the board of Racecourse Media Group around six months before the publication of last year’s list, says since last year she’s “had more relevant requests around serving on boards, which is exciting”.

Meanwhile, Mandy Ross says she believes that being on last year's list, “expanded my international network and created some interesting international career opportunities that would not have otherwise come my way”.

Expanding the opportunities
Karen Sierra-Hughes, director for Latin America and Caribbean government relations and business development at Gaming Laboratories International, says that being featured on last year’s Most Influential Women list has given her an opportunity to act as a role model to others.

“One of the positive outcomes was having industry colleagues reaching out for mentorship, even outside my network. I am certain that this recognition served to portray that our industry has opportunities for everybody in every region of the world,” she explains.

Micky Swindale says this type of support from other women can be vital. “They say many senior women suffer from imposter syndrome, and it can certainly feel lonely at times when you are so often the only woman in the room, so for me the recognition of being included on the list, along with the very supportive messages and comments I received from many across the sector as a result, was a really positive, empowering experience,” she explains.

Similarly, Shea says many people reached out to express support following her inclusion on last year’s list. She adds: “I love that you are showcasing women thriving in male-dominated industries such as sports betting.”

Anna Sainsbury, founder of GeoComply, says she sees the list as serving as a reminder that further action is needed on the equality front: “Awards like these help us remember and appreciate that an effort to shift our thinking, goals and actions needs to be made by all to ensure meaningful progress towards equality.

Ross adds: “The gaming and tech industries are challenged when it comes to gender diversity – but are such fabulous sectors to build a career in. This is why I think it’s critical that diversity is made visible and celebrated by the industry.”

Next up?
For her part, Ross is keen to see her former colleague Sue van der Merwe, managing director of Tabcorp’s lotteries and keno business, on this year's list.

“She has led the continued growth and transformation of this business over 30 years to make it the powerhouse it is today. She is also chair of the Asia Pacific Lottery Association, sits on the World Lottery Association Executive Committee and was inducted into PGRI’s Lottery Industry Hall of Fame in 2016, recognising her contribution to world lottery excellence and integrity. She’s a fantastic mentor and leader, and has been an amazing contributor to the sector locally and internationally.”

“Her testimony at state and federal hearings has propelled many legislators to understand better the controls available to online gaming operators, which frequently quell their concerns prior to voting for a bill.”

DeHaven champions Stephanie Weyant-Fidler, deputy executive director, marketing and product development at Pennsylvania Lottery, saying: “Her lottery is another amazing example of a US lottery proving that you can have success in a new sales channel.”

Lee-Ann Johnstone, founder of Affiliate Insider, says she can’t think of a better nominee than Income Access’s Sarafina Wolde Gabriel, vice-president of strategy, who she describes as “a figure head in the affiliate industry”.

“She’s not one to stand out in front much, but she’s one of the most influential people I know and deserves to be recognised for this award for the years she’s put in building successful programmes,” adds Johnstone.

Meanwhile, Boeskov says she is “impressed” by Colossus Bets’ chief commercial officer Eva Karagianni-Goel. “She’s bringing some great topics up for discussion and is very balanced and inclusive. And of course she holds a leadership position in the sports B2B area, which is quite rare for women.”