The head of Indian cricket’s anti-corruption unit has called for the legalisation of betting and a new match-fixing law in a bid to beat corruption in the country’s most popular sport. 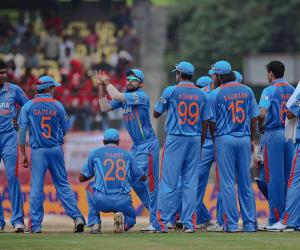 The head of Indian cricket’s anti-corruption unit has called for the legalisation of betting and a new match-fixing law in a bid to beat corruption in the country’s most popular sport.

Ajit Singh Shekhawat, a leading figure at the Board of Control for Cricket in India (BCCI), backed legalisation in an interview with the PTI news agency in which he also revealed that a dozen cricketers ⁠— including international players ⁠— have reported being approached to throw matches in the last year.

Shekhawat, formerly the director-general of police in Rajasthan until he switched to the BCCI’s Anti-Corruption Unit last April, accepts that the regulation of betting would have a positive impact on integrity issues.

“Maybe there could be thinking about legalising gambling so that all this illegal business which goes on can be controlled,” he told PTI.

“Legal betting will be done under some parameters and it can be controlled. It will also bring a huge amount of revenue for the government, close to what the excise department generates. The amount of money which is bet on sports is mindboggling.”

Shekhawat said that in the last year 12 cricketers, including national and international players, have reported corrupt approaches, while the Tamil Nadu Premier League has been investigated for suspect activity.

Last year, the Law Commission of India called for betting to be regulated and match-fixing to be made a criminal offence, as it is in England and Australia. The commission’s ‘Legal Framework: Gambling and Sports Betting including Cricket in India’ called for gambling to be regulated for those of 18 years and older, with bets linked directly to identity cards in order to reduce the risk of money laundering.

“I am not saying [betting] should be legalised but it should be considered,” Shekhawat said. “When legalised, it can be regulated, as of now it is completely illegal.

“Once legalised, you will also get statistics on who is betting and how much is betting.”