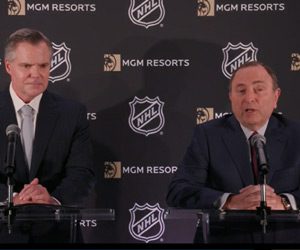 Under the terms of the deal – announced at a press conference in New York City – MGM also becomes the NHL's official resorts partner. MGM Resorts will be able to use official NHL branding across its land-based and digital sports betting offerings within the US. MGM Resorts – already the NBA's partner – will also have the ability to market many of MGM Resorts' products and services to the league's fans via its media platforms and events.

While no financial details were released, NHL commissioner Gary Bettman said the deal was worth a fixed amount and would not be impacted by MGM's takings on hockey.

Betmann confirmed that individual teams will be able to sign their own betting partnerships. William Hill is already linked to both Vegas Golden Knights and New Jersey Devils.

However, MGM will have access to “previously unseen enhanced NHL proprietary game data that will be generated by the league's state-of-the-art tracking systems currently under development”.

Speaking to the media, MGM chief executive Jim Murren said the partnership had been worked on for some time.

He said: “We were in talks with NHL from the very beginning. [The NHL and NBA deals] are different deals. This is specific for the NHL after good discussions with the league.

“We have created something comprehensive, but it isn’t exclusive. We believe in the free market. We intend to be a winner because of our analytics and loyalty programmes, not because someone else is boxed out.”

Bettman told the media he does not envisage wide-scale presence for betting shops within NHL venues, as he believes most betting will be via mobile. He also said that the two organisations' relationship was boosted by the Vegas Golden Knights' arrival in Nevada's gambling capital last year.

In a statement Bettman added: “The new sports betting landscape presents a unique opportunity for fan engagement utilising technology and data that are exclusive to our league.

“As a leading global gaming operator and entertainment company, MGM Resorts is the perfect partner for us to begin our transformative entry into this space.

“Fan engagement, technological advancement and innovation are paramount to our progressive approach and will be at the forefront of everything we do.”

The NHL deal was welcomed by the American Gaming Association (AGA), which recently estimated that sports betting could be worth $200m (€175m/£155m) per year for the ice hockey league.

“The NHL’s announcement today further strengthens the bond between sports entities and gaming companies, who are each committed to preserving the integrity of the game. As legal sports betting expands, we are encouraged by the growing relationship between gaming companies and the major sports leagues.”