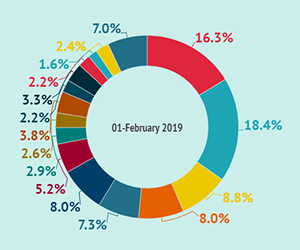 After a flat end to last year, the index bounced back at the start of 2019, writes Regulus Partners' Paul Leyland, however its rebound was not as strong as that of the NASDAQ.

The RP iGaming Index started 2019 ahead by 3.0%, but it is trailing the more dramatic recovery of the benchmark. This reinforces the pattern of the last few months – in gambling currently negative volatility counts for more than positive.

In part, this is likely to reflect prevailing macro conditions: tax rises in Italy and the UK; the cost of regulation in Sweden; the relatively slow (in stock market terms) progress of US regulatory change, with the added uncertainty of the DoJ’s revised opinion.

The muted positivity of the index was broad based. Of 35 stocks, 25  reported gains, with 14 of them double-digit. Of these (Bet-at-Home, Betsson, Boyd, Caesars, Churchill Downs, Codere, IGT, Inspired, JPJ, Kindred, Penn National, Rank, Scientific Games and William Hill), the only material common link is a tendency toward volatility.

Nine stocks fell, three of which saw double-digit falls. LeoVegas, GiG and Stride all face material additional online duty burdens this year (Sweden, the UK) on their margins, which will be difficult to absorb. Indeed, Stride has launched a strategic review.

From a gambling perspective, to us 2019 feels like it has more risks than potential upsides. Trading comps are tough, especially for European sportsbooks given their reasonably positive margins and the World Cup last year.

The signs of the slowdown in the UK (by far the biggest visible online market) do not seem to be materially abating, albeit with some easier VIP comps midway through the year. Regulatory change is gathering pace and seems to be all negative.

And then of course there is Brexit, which remains an unknown quantum of operational disruption, especially for UK-Gibraltar based businesses trading into the EU (although Malta has been a busy alternative hub in contingency plans).

The positives are likely to come from less mature markets adding meaningful scale as well as growth, although the signs from Spain’s official Q4 figures were “mixed”, especially in terms of active customers.

Hopes of M&A are likely to add elements of positivity, but are also high risk in terms of execution. Further, while M&A demands a premium, that does not necessarily mean a premium to current prices if circumstances change materially for the worse (especially, but not always, from a regulatory perspective).

Hopes of positive regulatory change in key markets (US, Brazil and Germany) could also add rating impetus, but as always the devil will be in the detail and the detail tends to have a capacity to disappoint in a sector typically over-long on hope.

The index is also likely to lose two constituents shortly, in Mr Green (acquired by William Hill) and Cherry (take private). Both have built credible mid-sized positions in largely Nordic and central European markets and both were important bellwethers for Nordic regulatory change.

While consolidation is likely to continue, a key question for the health of both online gambling and the market’s functioning is how soon will these constituents be replaced.

By far the biggest shaper of the index will be macro events, however broader investor confidence, macroeconomics and appetite for the particular mix of cash flow and risk that different gambling sectors bring will also play a role.

This is well worth remembering – it might be tough in gambling, but it’s probably far better than in cross-border manufacturing involving the US, China and/or the UK.

Stock in focus: Playtech
Playtech was once a darling of the igaming sector and its IPO in 2006 was a watershed moment for the industry’s relationship with the stock market. For 11 years it could practically do no wrong, rapidly shrugging off the impact of UIGEA and growing strongly in all markets other than the US (in marked contrast to other once US-facing listed business).

It was only in H2 2017 that the cracks started to show and since then the stock has lost 60% of its value (although it is in good company there: IGT and Scientific Games have displayed similar swings, albeit with greater volatility and a lot more debt). As the chart below shows, its downward trajectory continued throughout last year.

Much has changed. For a long time, Playtech could use Asia as an engine of high margin growth while tying up strategic deals in regulated markets as almost the only show in town. Now Asia is far more competitive from an online gaming supplier perspective, and investors are far more wary (including of regulatory risk).

Equally, a myriad of platform choices has cropped up and (sort of) commoditised the space, while the value of high quality content has also both increased and disaggregated. Further, as the US turned from an igaming backwater to the focus of many companies’ hopes and dreams, Playtech’s strategic absence started to look awkward.

The initial strategic response of doubling up with a legacy Italian land-based operational business could perhaps have been better timed (if executed at all) on a number of levels. These big systemic changes far outweigh any perceived governance issues Playtech might have had and now resolved (Playtech’s highly dynamic, but – to some – controversial, founder has now sold out).

Vertical integration is largely a dead business model for tier one operators outside emerging turnkeys (e.g., in the US currently, where Playtech isn’t). High margin dotcom business is being competed away and subject to increasing (if patchy) scrutiny.

Regulated markets are very tough to monetise, sometimes even to access. Machine gaming in Italy is on the wrong end of both fiscal, regulatory and consumer demand history.

The issues are clear. What is not yet clear is Playtech’s response (other than the Snai deal, which we see as rather like fixing your car’s engine trouble by fitting a yoke).

However, it is a big beast to bet against and its grip on the sector might be weaker than it was but it is still both strong and multi-layered. In many respects Playtech is a hangover from another era, the dotcom era, but whether this makes it a dinosaur or a shark remains to be seen.

Disclaimer: The narrative provided represents the opinions of the authors. Any assessment of trends or change is necessarily subjective. The information and opinions provided are not intended to provide legal, accounting, investment or policy advice, nor should they be used as a forecast. Regulus Partners may act, or has acted, for any of the companies and other stakeholders mentioned in this report.