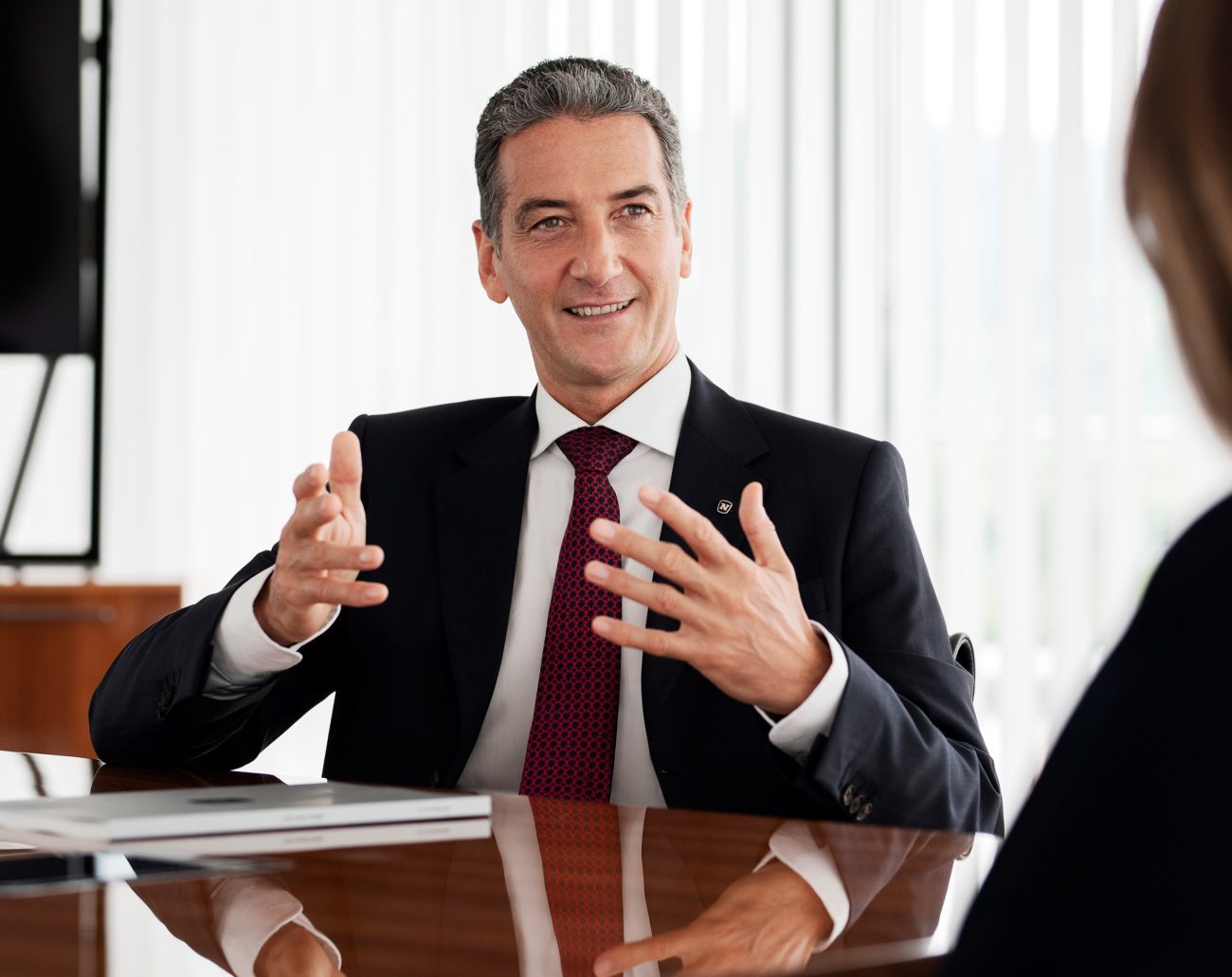 The size and scale of Novomatic’s business today is staggering. The group has more than 255,000 gaming and video lottery terminals in operation worldwide, as well as a network of over 2,100 proprietary casinos and sports betting outlets, not to mention B2B and B2C igaming offerings.

It has a presence in more than 50 countries and supplies its solutions to businesses in over 70 nations. It employs 30,000 people, including 3,200 in its native Austria, and sales totalled around €2.6bn in its 2018 financial year.

It’s certainly impressive, considering it was founded by Professor Johann F. Graf, with 50,000 Austrian schillings and 12 employees, as a company that imported pinball machines from the US, and even more so when one considers it didn’t originally set out to be a gambling business.

The growing interest in slot machines at the business, then called Novomatic Automatenhandels GmbH, led to the acquisition of UK slot machine manufacturer JPM.

This saw Novomatic become a gaming company “in one fell swoop”, chief executive of the main holding and core company Novomatic AG Harald Neumann says. Not just a new competitor either; it became the second largest slot manufacturer in the industry.

Slots may have been the starting point, but today it is active in every vertical, in just about every regulated market, both as an operator and as a supplier.

Perfect storms
This, however, brings with it new challenges. As a highly regulated and expansive business, it’s natural to assume that 2019 – a year in which the industry has been buffeted by regulatory headwinds – may have been a trying period for Novomatic.

This appears to be the case, judging by its half-year results. For the six months ended 30 June 2019, Novomatic AG’s revenue was down slightly, though remains at a huge €1.26bn. However, its profit for the period dropped to €34.3m, of which €19.5m came from discontinued operations. Strip that out and net profit for the half-year was €14.7m.

“The reporting period was affected by changing legal framework conditions in Novomatic’s core markets such as Germany and Italy,” Neumann explains.

On the subject of regulatory headwinds, he points out that the gaming industry faces “a very dynamic regulatory environment”.

“Providers are constantly required, due to continuous legal changes, in particular in the area of money-laundering prevention and protection of players and minors, to further develop their services and products and adjust to suit these changing framework conditions,” he says.

However, despite the single European market fostering ever closer cooperation between its constituent nations, gaming remains the only segment for which regulations are yet to be harmonised.

While Novomatic is a strong supporter of a harmonised regulatory framework, especially for online gaming, Neumann admits that this “currently appears unlikely”, noting the European Commission appears content to leave states to their own devices when it comes to games of chance.

“It appears that individual member states will be granted even greater discretion to regulate the industry individually,” he notes.

This can be a positive, depending on each member state’s approach to gambling. In Neumann’s eyes, Denmark, Sweden and – eventually – the Netherlands’ approach towards regulation provide the blueprint to follow.

“These countries either already have strict regulations with what is in principle free market access to acquire online licences, or are planning to implement them.

“Excessive regulation that does not conform with the market, unsuitable taxation or gradual tax increases, as seen in Italy or in Romania, can have negative effects,” he adds, however. “Experience clearly shows that excessive regulation, inappropriate taxation or total bans simply encourage illegal operations; operations which are not monitored and which provide no protection for players and minors.”

This does create a certain challenge for Novomatic; with a presence in over 50 countries, not to mention B2B partnerships in more than 70, finding new markets that are regulated, and under viable terms, must be a challenge. Neumann says that “every product and service from Novomatic and its subsidiaries will always meet the legal requirements for the respective markets”.

He does admit that finding new markets and business areas is a challenge, but the same that any company of a certain size and scale will face.

For Novomatic to continue thriving, he says, it requires a clear legal framework with systematic and coherent regulation, as well as a transparent licensing process, all supported by effective layer protection measures.

The R&D edge
Yet it’s not all down to finding room to grow. It’s also having a steady flow of new products and services to roll out in these new – and existing – markets.

“Research and development plays a central role at Novomatic and has done since its foundation,” Neumann says. “In the last three years alone, the group has invested €300m in this field.”

It currently maintains 25 technology centres across 15 countries, and employs more than 1,200 staff focused on R&D. This goes beyond simply making new products, as far as developing security technology, such as biometric access systems, for its hardware. If you’re going to provide something to everyone, you have to be prepared to put in the work.

The biometric technology was on display at ICE London, alongside new land-based casino and amusement with prizes products and systems, complemented by online gaming, sports betting and cash handling solutions.

A key focus was linked progressive games, both standalone titles and multi-game editions, as well as new titles in the Concurve range, and expanded modular functionality built into its myACP casino management system.

Its sports betting subsidiary, Novomatic Sports Betting Solutions (NSBS),also presented NovoPrime Sports, developed in partnership with Sportradar that was struck in February 2018. It’s hard not to see this roll-out as a sign that it has designs on a piece of the US sports betting market.

The stand, as it is every year, was a dominant feature of the exhibition hall, built on over 5,000 square metres of floor space, featuring 350 gaming terminals and a 160 square metre LED wall, supported by 6km of copper wiring and 2km of fibreglass cables.

It has to be, considering it brings together more than 20 subsidiaries from around the world. Novomatic is a business that has grown constantly, both organically and through M&A, and shows little sign of stopping.

While Ainsworth Game Technology was perhaps the highest-profile deal of the past decade, its website lists 32 deals in total since 2010. This doesn’t include the establishment of new divisions and subsidiaries.

Scale challenges
To make so many disparate components work in harmony is certainly a challenge, and it’s perhaps not surprising that alongside the half-year results announcement Novomatic pledged to make the business more efficient going forward.

This will be achieved through optimising internal processes and structures at an international level. “In doing so, the gaming technology group hopes to increase company efficiency and achieve strong synergies between the shareholdings,” Neumann explains.

This will be aided by communication. Mindful of the growth of the business, and the fact that an entity of Novomatic’s size is “much more cumbersome” than a smaller operation, Neumann says there has been a particular focus on ensuring each division is aware of what others are doing or developing.

As the business turns 40 in 2020, it also marks Neumann’s fifth year as CEO. While he joined an already sizeable business, he says recent expansion has seen it become “the undisputed number one” gaming technology business in Europe.

“I am of course very proud of that,” he says, before running through a list of landmark deals and achievements under his stewardship.

“The group has grown strongly through acquisitions, such as that of Ainsworth Game Technology, which has opened up new market opportunities for us in the USA.

“In Germany, we have secured our market leadership with the acquisition of Casino Royal GmbH, while our subsidiaries ADMIRAL Sportwetten and Greentube are very well positioned in the areas of sports betting and online, mobile and social gaming.

“Our corporate responsibility strategy has also undergone significant development in recent years. We hold several certifications and most recently we, together with some of our subsidiaries, were the first Austrian company to receive the international G4 player protection certification.”

Perhaps what makes Novomatic stand out from its peers is that for a business of its size and scale, it’s somehow still particularly agile. While other businesses will have key priority areas or markets, it has managed to keep a sense of momentum going across multiple territories and verticals.

The Sportradar partnership is a good example of this: while updates have been infrequent since it was struck in 2018, work has clearly been ongoing to present NovoPrime Sports at ICE.

Evolution has served it well over the past four decades. While regulatory headwinds may have hit the business in 2019, as they did the wider industry, it’s unlikely that it will have the sort of long-term impact that could derail another company. That pinball importing business from Gumpoldskirchen looks well positioned to enjoy another 40 years at the top end of the industry.