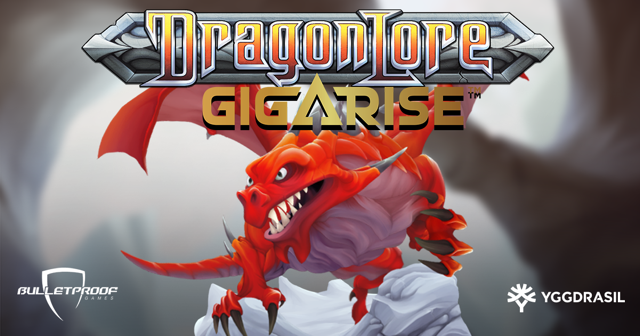 Brand-new title the latest to be powered by Yggdrasil’s cutting-edge GATI technology.

Yggdrasil and Bulletproof Games are set to take on a fearsome dragon in their latest launch – Dragon Lore GigaRise.

The title transports players to a fantasy land where fearsome creatures run amok. Meanwhile, players are faced with a variable grid that can grow to a mammoth nine symbols high with 100 paylines, thanks to the GigaRise feature.

Every time a dragon egg lands on a reel, the GigaRise feature is activated, increasing the reel height by up to 3x. Each reel stays raised between spins.

Three or more scatter symbols will trigger free spins, where up to 20 spins will be awarded. Every time a dragon egg lands in the bonus, a super wild will be present for a single spin, significantly enhancing win potential, while a win multiplier is added to the spin.

Spins can be retriggered if three or more reset symbols land during the bonus. In addition, it is possible for players to trigger both the super wild respins and free spins on the same round.

In Dragon Lore GigaRise there are five separate “buy a bonus” options, awarding a variety of reel heights depending on the bet stake. There is also the option to increase the bet stake for a greater chance of triggering a special reward via the Golden Bet feature.

Commenting on the release, Stuart McCarthy, head of product and programmes at Yggdrasil, said: “Our latest GigaRise title combines an epic theme with one of our most popular GEMs, and we’re extremely pleased to facilitate the launch of Bulletproof’s new launch.

“Dragon Lore GigaRise is another exciting example of the power of the YG Masters programme, and we couldn’t be happier.”

Michael Bullock, product director at Bulletproof Games, said: “Dragon Lore GigaRise is a fantastic new title that highlights the very best of what we can offer as a studio, combined with an innovative GEM from Yggdrasil. It perfectly highlights opportunities that we can pursue as a YG Masters member, and we’re confident it will be excellently received by players.”