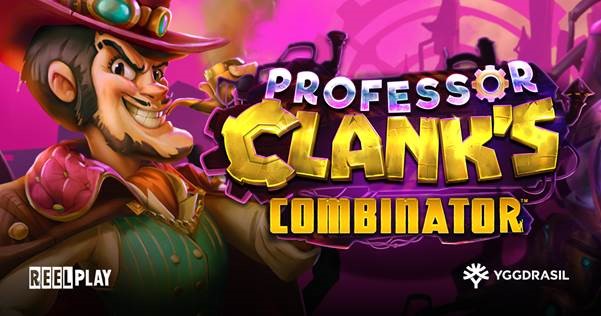 Players are introduced to a unique mechanical world dominated by robots in ReelPlay’s latest release.

The six-wide cascading slot packs plenty of features into the marvellous machine that houses the reels, while the professor himself acts as a wild symbol throughout the game.

At the beginning of each round, each reel is three symbols high, and if a winning combination is achieved then all non-winning symbols are removed in an explosion. All remaining symbols will then drop down to the bottom-most position in the column.

If, after the explosions, there is more than one symbol type remaining, then they are all transformed into the highest paying symbol. Finally, if after both of these take place and there is no longer a win possible, boosters will land, ensuring a win is made possible.

Further drops can occur on reels that have fewer than five symbols, further increasing the chance of landing scatters or more wins.

Five or more scatter symbols will trigger the respins bonus feature. Each scatter symbol contains a cash value, with every successful cascade resetting the count to three. There are also four special bonus types available: bronze, silver, gold and platinum, awarding up to 2,000x.

In addition, in certain jurisdictions players can purchase the bonus via the buy feature.

Discussing the new title, Stuart McCarthy, head of product and programmes at Yggdrasil, said: “Working with ReelPlay allows us to bring numerous concepts and excitement to the market through a plethora of unique titles.

“Professor Clank’s Combinator brings a thrilling take on the popular hold and win style gameplay, while its cascading win mechanics elevate the game to a new level.”

David Johnson, CEO at ReelPlay, said: “Professor Clank’s Combinator is ReelPlay‘s fresh take on cascading gameplay, where only winning symbols remain. Ways, reactions, morphs and boosters along with feature bonus respins and feature gamble are all in the mix.”

“Professor Clank is the most extraordinary inventor engineer; with his funky gear and trusty robot, he’s nothing like you’ve ever seen before.”