Flutter Entertainment’s integration of The Stars Group business will see it migrate all sports betting brands to the solution powering its Paddy Power Betfair division, while it aims to significantly ramp up investment in PokerStars going forward. 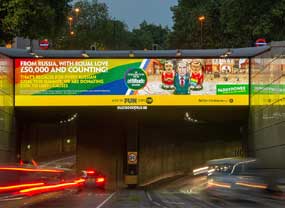 Flutter Entertainment’s integration of The Stars Group business will see it migrate all sports betting brands to the solution powering its Paddy Power Betfair division, while it aims to significantly ramp up investment in PokerStars going forward.

The combination with The Stars Group completed on 5 May, and saw the operator take change of a range of new brands, such as Sky Bet, Sky Vegas and PokerStars.

“It also strengthened the breadth of the group's technology capabilities, with our task now to develop and expand our range of innovative products while delivering the best player protection framework to our customers,” Flutter said.

In the three and half months since the deal was finalised, it continued, it had made a number of important decisions over the operation of the expanded business. As outlined in April, it will move to a decentralised – or federal – operating model, with a central group function supporting four regional teams.

This will see Sky Betting and Gaming, Paddy Power and Betfair consolidated into a UK and Ireland segment, and PokerStars, Betfair International, Adjarabet and the B2B risk and trading operations merged into the International division.

Australia, comprising BetEasy and Sportsbet, will continue as a single unit, while the US division will incorporate FanDuel, Fox Bet, TVG and PokerStars’ US operations. Four divisional chief executives have been appointed – but not yet named – and key leadership roles filled, with financial results to be broken into these segments from 2021 onwards.

Technology integration, meanwhile, will be driven by protecting the momentum in each division going forward. Following a review of the available options, Flutter has concluded the business will be best served by using Paddy Power Betfair’s online sportsbook platform as its global platform.

This will result FanDuel being migrated to the solution, which incorporates proprietary technology and SG Digital’s OpenBet.

This would suggest the Fox Bet and BetStars sportsbooks operated by The Stars Group, which have been powered by Amelco since 2015, will shift to the platform, while FanDuel will migrate away from GAN and International Game Technology. FanDuel’s deal with IGT was expanded earlier this month, to cover all regulated US states.

The integration of the business is most advanced in Australia, where Flutter has opted to pursue a single-brand strategy, with BetEasy customers migrated to Sportsbet as a result.

“Across the remaining divisions, detailed reviews are well advanced to determine our brand, product and technology strategies,” it said. “Once completed we will move swiftly to execute on our plans, just as we have in Australia.”

Efforts will also be taken to improve the quality and sustainability of the business.

“We said at the time of the merger announcement that we would review the compliance standards and market exposures of the combined group once the transaction was complete,” Flutter said. “Where standards differed from those of Flutter, we aimed to adopt the higher of the two.”

This review fell into two broad categories; assessing the quality of The Stars Group’s responsible gambling and anti-money laundering procedures, and the legal, regulatory and tax risk associated with each international market. The review is ongoing, though Flutter has already flagged a number of areas in which improvements are necessary.

This has seen its enhanced protocols implemented across Stars’ brands, while it has withdrawn the acquired brands from “a small number” of jurisdictions that Flutter had previously determined it would stay out of. These withdrawals will reduce annual income by around £65m, it noted.

Looking ahead, a particularly focus will be investing in PokerStars. Flutter said that prior to the combination with Stars, it believed that the business’ high profit margins were driven, at least in part by underinvestment. Having worked to better understand the business post-acquisition, ti has now set out three key areas for additional investment.

This will see sales and marketing investment ramped up. As a percentage of Stars’ revenue, this amounted to just 14% in 2019, compared to an industry average of around 25%, while casino revenue growth had been driven entirely through cross-sell form poker.

Promotions, such as free bets, are also likely to be ramped up, following five years in which these rewards have been reduced. While Flutter acknowledged that this was done to focus on customers that enhanced the liquidity of its poker ecosystem, it said it would look to strike a balance between effective promotions that drove sustainable customer growth.

“It is clear that the customer perception of the PokerStars product lags behind competitors in a number of jurisdictions and we have work to do to address this,” the operator explained. “We are looking at ways in which we may be able to accelerate development work on product and operational improvements to address these gaps and to build increased flexibility into the technology stack.

The sportsbook product was also in need of a refresh, it added, something that would be addressed through the migration to the Paddy Power Betfair platform.

The business may also look for additional M&A opportunities going forward, provided they “further enhance the growth profile and diversification of the group”.

“Given the strength of our presence in our core markets (e.g. UK, Ireland and Australia), it is more likely that such transactions will be pursued by our International division,” it added.

The strategy update was published alongside the operator’s results for the first half of 2020, which revealed a 49% year-on-year rise in reported revenue to £1.52bn, with the business’ expansion and diversification offsetting the impact of novel coronavirus (Covid-19).