7 minutes read
Leading tipster site bettingexpert.com evaluates the mobile betting platform and app offerings of 26 of the most popular bookmakers

Leading tipster site bettingexpert.com evaluates the mobile betting platform and app offerings of 26 of the most popular bookmakers.

The popularity of sports betting the world over has seemingly grown hand in hand with the use of mobile devices. In fact the majority of bettors, particularly casual bettors, now bet via their mobile device, particularly when it comes to live betting platforms.

Placing a bet while watching a football match with friends at the pub or on the lounge has become almost a ritual. Debating live betting odds or the markets for the upcoming match has added an extra dimension of participation and enjoyment for sports fans across the planet.

But which bookmakers offer the best mobile apps and mobile betting platforms? To find out we researched and evaluated the mobile betting options available at 26 of the world’s most popular bookmakers. These included:

Rather than undertaking a labour-intensive subjective review campaign, we decided to evaluate each mobile betting platform considering the following: 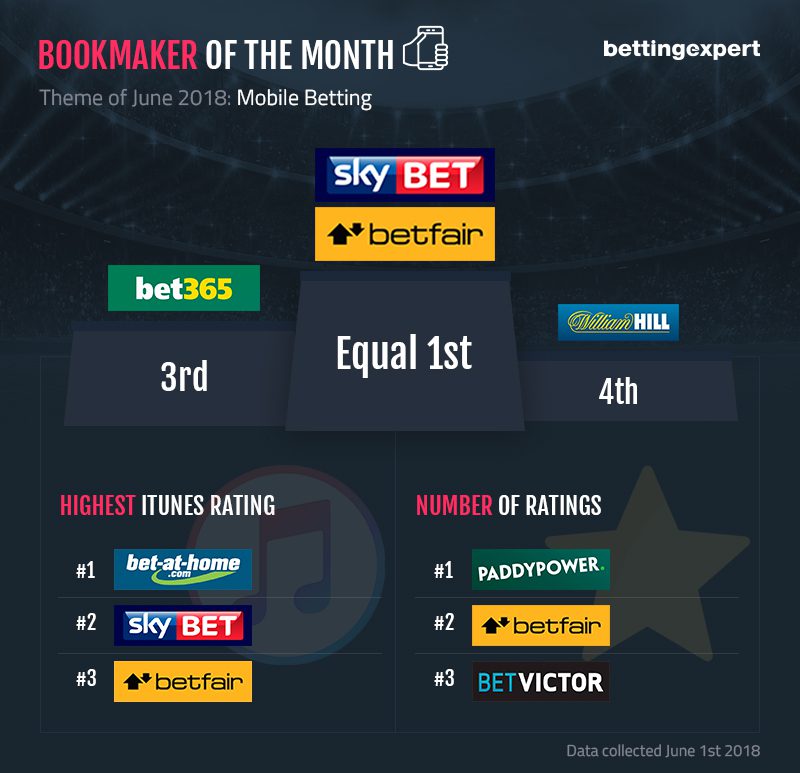 It was a close call with a near three-way tie for first place. But after much consideration, both Betfair and Skybet shared the spoils, with bet365 not far behind in third place.

Betfair mobile betting
At the time of collecting our data, Betfair had an iTunes rating of 4.6, which placed it third in our rankings behind Bet At Home and Skybet.

A solid rating, and even more so considering the number of reviews given — a total of almost 19,000 at the time of collecting our data — ranking it second behind Paddy Power for the total number of iTunes ratings delivered for its Apple mobile betting app.

While ranking highly for overall rating and number of reviews given, Betfair ranked eighth among our 26 bookmakers for its ranking in the iTunes sports app category, with an overall ranking of 34.

In terms of app size, Betfair’s mobile app ranked in the middle of the pack at 46MB, while ranking in the top third for the number of languages its app is available in, with 11 languages on offer.

Lastly, Betfair has an Android app available for download.

Skybet mobile betting
Coming in equal first with Betfair, Skybet offers a superb mobile betting platform. Skybet ranked second behind Bet At Home for the highest iTunes average rating, with an average of 4.8, while ranking fourth in total number of reviews given, with roughly 5,300 at the time of collecting our data.

Unfortunately, Skybet ranked poorly when it came to languages available, with its app currently available only in English. Finally, Skybet has an Android app available for download.

Bet365 mobile betting
Coming in third place, just short of both Betfair and Skybet, was bet365. As one of the world’s biggest bookmakers, one would expect bet365 to deliver a great mobile betting platform.

At the time of collecting our data, bet365 held an average iTunes app rating of 4.0, placing it middle of the pack of our 26 bookmakers, with 1,500 reviews given, ranking it sixth.

William Hill ranked second in the iTunes sports app category with an overall ranking of 11, second only to Skybet with a sports app ranking of 7. The William Hill Apple app is, however, one of the largest apps at 68.2MB, placing it well down the list of our 26 bookmakers. In terms of languages, it ranked in the top half of bookmakers with six languages available.

While William Hill has an Android app available, it is also one of seven bookmakers with an exclusive bonus available for mobile users, with its current Bet Boost offer.

While ranking third for average rating, Paddy Power was the clear winner when it came to total number of iTunes ratings given for their app, with almost 26,000 ratings registered at the time of collecting our data — quite a heavy endorsement of its mobile app for Apple devices.

Paddy Power also ranked quite well in terms of its iTunes sports app category, with an overall ranking of 24, making it sixth among our 26 bookmakers. Paddy Power has one of the largest mobile apps at 56.6MB, while offering the app in just one language. Finally, Paddy Power has an Android app available for download.

Conclusion
There is no doubt that the future of betting is in mobile access. Now more than ever before, bettors demand immediate access to markets both pre-event and live, betting offers, banking options and features such as cash out and live streaming.

While subjectively evaluating each mobile betting app is a task well beyond the time available of the average bettor, platforms such as iTunes make it easy to find the most popular and highly rated mobile betting apps, providing punters with detailed information so they can make informed choices when selecting their preferred mobile betting platform.