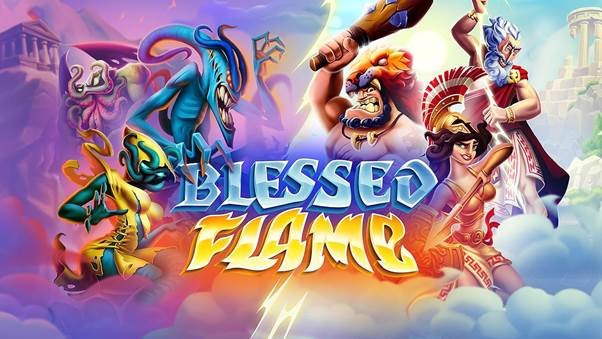 Evoplay premium online slots provider has entered the realm of the deities to deliver a gripping experience in Blessed Flame, a mythical release that follows the never-ending conflict between fearless immortals and their powerful enemies.

Stacked with Greek tradition and symbology, Blessed Flame depicts the battle between the habitants of Mount Olympus and their fabled foes, including the gigantic monsters Cthulhu, Hastur and Nyarlathotep.

In the base game, Greek gods Zeus and Athena summon Heracles to assist them in vanquishing the ruthless creatures, which appear shoulder to shoulder on the reels and form thunderous winning combinations.

If two identical Olympian symbols land in parallel positions on the first and fifth reels, they become Olympic wild symbols, triggering a respin each time the conditions are met.

A similar mechanic is triggered when two giant symbols land in parallel positions on any of the three central reels, causing them to become giant wild symbols and trigger a respin.

To deliver more exciting outcomes, landing three scatter symbols will trigger free spins, causing an additional position to be added to the first and last reels and two positions to be added to the second and fourth reels, increasing the number of ways from 1,024 in the base game to 6,300 in the free spins.

Commenting on the launch, Ivan Kravchuk, CEO at Evoplay, said: “We’re thrilled to launch yet another story-driven title, with this one taking inspiration from Greek mythology and the great legends of their gods.

“Stacked with a host of engaging features and captivating animations, the new release provides players with an immersive playing experience and insight on the great battles that once occurred between the gods and their legendary adversaries.”