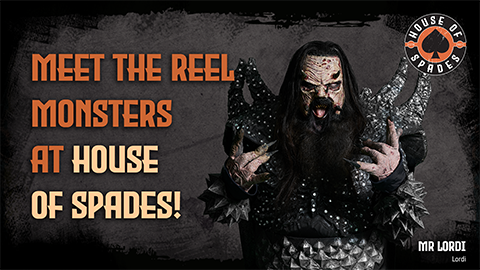 What do Alice Cooper, the Godfather of Shock Rock, and Dee Snider of Twisted Sister have in common, apart from being rockstars? They are both fronting the new rock thematic online casino House of Spades – and now they are welcoming Finnish metallers Lordi with a hard rock hallelujah.

House of Spades is a casino like no other. One thing that really sets it apart – in addition to its innovative casino product – is the close collaboration it enjoys with global rock bands and their official slot games. House of Spades offers its players genuine ‘what money can’t buy’ experiences, direct from the bands to the fans.

On 28 April, Lordi released their monstrous slot Lordi Reel Monsters by Play’n Go. And together with the Finnish rock gods, House of Spades is offering everything from a unique welcome offer for the band’s fans, a raffle of rare Lordi vinyls for everyone playing the Reel Monsters slot, and a premium avatar in the form of Mr Lordi as a hotel guest, available for purchase in the casino shop. And last but not least, a House of Spades-produced game trailer together with Mr Lordi himself.

House of Spades casino has the theme of a rock’n’roll hotel where Dee Snider mans the reception desk, ready to check players in. Once players have picked their avatar and made their first deposit, they are checked in to their designated hotel room and are ready to play. House of Spades is all about innovative personalisation and gamification. The unique House Tour loyalty programme takes players on a six-level adventure around the house in the name of rock ’n’ roll. Who will finish the game and become the owner of the hotel?

A growing number of global rock and metal acts are also signing up to produce their own official slot games, and House of Spades is at the centre of it.

House of Spades has got everything you can ask for in a quality casino product. It offers an appealing theme, a rewarding bonus system, a generous VIP programme and an impressive range of more than 4,000 slots and casino games from the best game providers in the world. Licensed in Curacao, the gaming platform comprises games from more than 90 suppliers and offers safe banking services from renowned payment providers.

With special welcome offers tailored for the fans, rare rock rewards like exclusive vinyls directly from the bands, and a cutting-edge product like no other, House of Spades is ready to rock the industry.