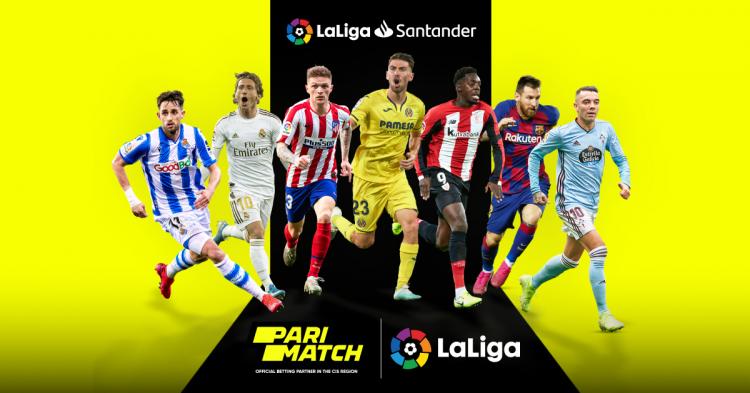 Parimatch, the global betting and technology company, has announced a two-year agreement with Spain’s La Liga, which will see it become the league’s official betting partner in the Commonwealth of Independent States (CIS).

Parimatch will be La Liga’s official betting partner across 15 territories in the CIS region. All events organised by La Liga in the region will feature Parimatch branding in line with local permissions, displayed through 3D carpets during match broadcasts while its marketing will feature in the away matches for Atletico Madrid, FC Barcelona and Real Madrid.

Parimatch will also gain access to all La Liga logos, emblems, trademarks and image rights for seven active players, to use across marketing materials. Two La Liga legends will also support Parimatch PR and marketing events and will appear in Parimatch TV advertising campaigns for broadcast in the CIS region. In the future Pariamtch will also have access to La Liga match tickets, which it will be able to offer as prizes and incentives for its players.

This partnership, which also includes the possibility of a one-year extension, will consolidate Parimatch’s leading brand position in the CIS region where the company already has 20% market share. Parimatch is one of the fastest-growing bookmakers, known for forging partnerships which excite and attract sports fans across the spectrum, whether it be football, esports or UFC.

Commenting on the agreement, Dmitriy Sergeev, CEO Parimatch CIS, said: “This collaboration is strategically important for Parimatch and represents an opportunity for us to reach the loyal fanbase of one of the most popular football leagues in the world, whose players are some of the most iconic names in football today. This agreement will see our brand awareness increase not only in our key markets across the CIS, but also on a global level. La Liga shares our commitment to the fan experience, so this partnership is a fantastic fit for us.”

Tamara Babits, business development director, Parimatch CIS, said: “At Parimatch, we are driven by our passion for sport and entertainment, so what better partner than one of the world’s most popular football leagues. We are so excited that our brand will now share the playing field with some of the greatest players in the sport today. We will work hard to build our both brands’ presence across the CIS together.”

Oscar Mayo, director of business, marketing and international development at La Liga, added: Strong local partnerships are key to making deeper connections with our fans and growing our global presence. In the CIS, our following has increased significantly in recent years creating an audience that is keen to get closer to our competition. Parimatch shares our ambition to create world-class entertainment and is an ideal partner with which to continue this growth across the region.