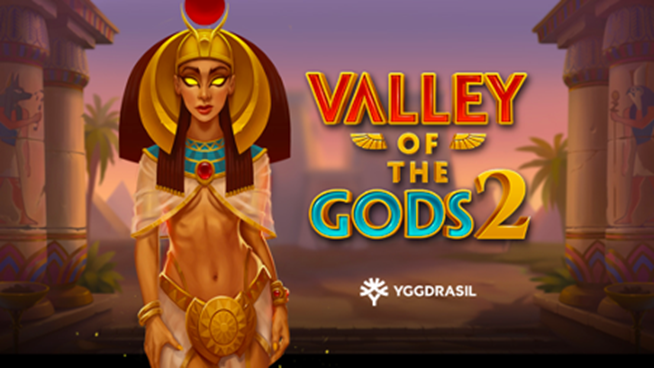 The original version of the title has proven hugely popular with a demand from players to build this upcoming sequel. With Valley of the Gods 2, Yggdrasil delivers even more thrilling excitement for slot fans to enjoy.

Valley of the Gods 2 has a proven, simple gameplay mechanic which is widely accepted by all player types including casual as well as more demanding players. The game also offers new features, such as collectible wilds, which is a key to higher variance and super big wins up to 5,481 times the bet.

The variable reel slot with up to 20,160 ways to win is set in a lost desert landscape. With 33 symbol positions, players are tasked with destroying the scarab symbol blockers. Every win, aside from creating a respin, releases a white scarab which destroys a blocker. If all blockers are destroyed then extra features can be triggered, such as win multipliers, wild reels and extra lives.

For every five red scarabs collected, a player is awarded an extra life, giving them a further respin once they run out of winning spins. If all lives are spent, the respins feature ends.

The win multipliers increase by 1x with every five blue scarabs landing on the reels, again lasting until the end of the respin. The total win is added to a player’s balance after no more winning combinations are present and a player has no lives left.

One wild reel is added if five yellow scarabs are collected and stays until it wins.

The title is the latest in Yggdrasil’s growing proprietary slots portfolio, which has recently been expanded by the innovative titles Jackpot Express, Multifly! and Lucky Neko Gigablox, as well as the company’s YG Masters content, created together with its boutique studio partners.

Discussing the new title, Jonas Strandman, senior product strategist at Yggdrasil, said: “Valley of the Gods became an instant classic from its simple but deep gameplay and thrilling respin rounds. The sequel has everything we loved from the original and more. Packed with plenty of modifiers, Valley of the Gods 2 can turn any spin into a huge win up to 5,481 times the bet for our fans across the globe.

“The new wild reel feature shows up on a regular basis and can give huge win combinations and combining it with a multiplier is marvellous. We are confident our partners and their players will love the game.”

To find out more about the newest title, click here.