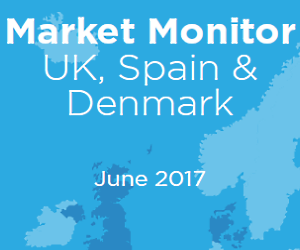 Welcome to the June edition of the iGaming Business Market Monitor where we round up what's been happening in the UK, Spain and Denmark. The shadow of regulation continues to loom large over the UK’s remote gambling sector and the resulting uncertainty has the sector on edge.

Alongside the reviews currently underway by the Competition and Markets Authority (CMA) and the Information Commissioner’s Office (ICO), there remains the threat from the government’s long-delayed and much debated Triennial Review, which includes, for the first time, a review of gambling advertising on TV.

In August we will also see the implementation of the Point of Consumption tax on bonuses, which analysts say is likely to have a big impact on the sector.

The Gambling Commission has also been flexing its muscles recently, with the past two months alone seeing it put 888’s UK licence under review, fine BGO Entertainment £300,000 for misleading advertising and demand Lottoland pays £150,000 to good causes for breaching advertising and marketing codes.

Despite all these headwinds, the sector still appears to be growing, albeit at a slower pace than it has over the past five years. But given the maturity of the UK igaming sector and its now-enormous size at £4.5 billion gross gaming yield (GGY) per year, some flattening off was perhaps to be expected.

On the continent
In Spain growth has been a bit stop-start since slots were licensed in late 2015. After a promising start, slots rose quickly to be worth €16.8m in gross gaming revenues (GGR) in the last quarter of 2016.

However, by the first quarter of this year, the product’s rise appeared to have hit a barrier. Total slots GGR for the three months to March came in at €13.7m, a near 20% fall on the previous quarter. Although it still represented a 44% year-on-year rise, it suggests at least a pause in progress.

It wasn’t all bad news in Spain though with roulette, which is equally as popular as slots in the country, rising 7% on the previous quarter.

Now that all products are available in the Spanish market, the total market is expected to break the €500m barrier in the year ahead, although considering its population is only about 30% smaller than the UK’s but the latter has an igaming market more than 10 times larger, it’s fair to say that so far, Spain's market size has been underwhelming.

Partly, its growth is being stymied by high taxes — Spain’s tax rate is 25% of GGR, compared with the UK’s 15%. In a recent report, Spanish online gambling association Jdigital said this is one of the reasons why just 20% of licensees are turning a profit in the country five years after licensing first began.

On this front, changes may be afoot, with comments from Juan Espinosa Garcia, the new director at Spanish regulator Dirección General de Ordenación del Juego, prompting speculation that the authorities might look at lowering the Spanish tax rate.

Previous editions of Market Monitor have noted that Denmark’s success is partly due to the fact it seems to have struck the right balance between business interests and consumer safety. The Danish market is likely to grow even further when the last element of liberalisation of the market takes place later this year and the markets for bingo and horseracing open up.