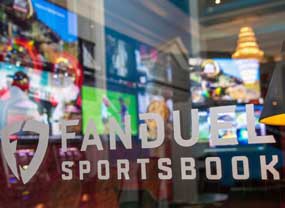 Jackson spoke after Flutter announced an earnings update for Q1 of 2022, in which revenue came to £1.57bn (€1.86bn/$1.96bn), up 5.5%. The growth was mainly due to the FanDuel-led US segment, where revenue was up 45%, while UK and Ireland and international revenue both declined.

The announcement of Flutter’s results came the morning after Caesars reported heavy losses from its digital segment, due to high marketing spend that it said had already been pared back.

In contrast, Jackson said that Flutter was seeing no reason to change the marketing strategy that had helped FanDuel become the leading brand in the US sportsbook market.

“We’re very pleased with what we’re seeing in America at the moment,” Jackson said. “There are two market dynamics we’re seeing. There’s New York and the rest of the US.

“Looking at the rest of the US, we’re driving very hard on customer acquisition and we’re very happy with both the acquisition costs and lifetime value dynamics. So we’re continuing to push really hard on acquisition. Other people seem to be stepping back but we’re seeing big opportunities and we’re really leaning into it.”

Jackson added that while other businesses had spent more on promotional offers, FanDuel had been able to hold onto customers as these offers dry up due to its product.

“I think first and foremost it’s about the quality of our product,” he said. “We know that we are ranked as one of the best products and that is really really important. But more than that we get the benefits of a lot of our proprietary risk and trading products and tech. That makes a big difference in the lifetime values we see.

“Customers might have taken money from some of our competitors but now they’re migrating to the best product which is FanDuel.”

Flutter’s international business, however, was negatively impacted by the effects of regulations and tax in Germany and the Netherlands. Here, Jackson said that the business will see positive comparatives in the second half of the year, as the impact of changes are captured in the comparable period.

In the Netherlands, Flutter is active through the Tombola brand that it acquired at the start of this year, but its other brands had to withdraw from the market when it opened in October. Jackson said the business previously expected to receive a licence in the first half of this year, but now is anticipating approval may take more time.

“We’re in the process of going through our licence application and we now think it’ll be somewhat later than expected. Back-end of this year, maybe early 2023,” Jackson said.

The business also reported a delay in its planned acquisition of Italian lottery and gaming operator Sisal. Initially, the deal was set to close this quarter, but Flutter now expects the deal to be complete in Q3. Jackson said that while the deal moved from one quarter to another, the expected delay is only a short one as the business waits for approval from competition authorities.

“It’s always very tough to set a point where an antitrust authority may approve a transaction,” Jackson said. “We hope that it’ll be approved in early Q3, really not far from Q3, just the way things move around, switching things a few weeks, can move things between quarters.”

In the UK and Ireland, Flutter’s revenue declined year-on-year, mostly due a £30m revenue impact from a number of safer gambling measures. While these included a £500 loss limit for players aged under 25, Jackson and Flutter UK and Ireland chief executive Conor Grant both said the impact came mostly from other measures.

“You’ve got to remember that the number of under-25s that we have in our base is quite small,” Jackson said. “While we’ve done the right thing and it’s having an impact, but it’s immaterial in terms of its year-on-year impact on our revenue.”