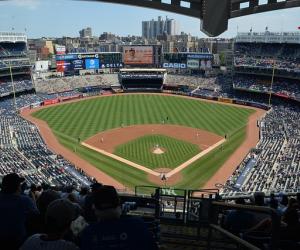 MGM has completed a treble of major US sports leagues after signing a partnership with the MLB baseball league to add to its deals with the NBA and NHL.

Under the terms of the multi-year agreement the group becomes the first official gaming and entertainment partner of the baseball league.

The deal is similar to MGM’s other deals with major US sports leagues, including marketing and data rights.

MGM will have exposure on league media platforms, including MLB.com and MLB Network, and be able to use MLB branding on its own sites, including PlayMGM, its joint venture with GVC. It will have presence at major events such as the World Series and All-Star Game.

MGM will have access to official data rights on a non-exclusive basis, with exclusive access to some “enhanced statistics” from Statcast, the automated tool that analyses player movements and athletic abilities.

MLB commissioner Rob Manfred, who has been open to sports betting since his appointment in 2015, said the partnership “will help us navigate this evolving space responsibly, and we look forward to the opportunities for fans to participate in the future.”

MGM chairman and CEO Jim Murren said at a joint press conference that he wants the partnership to “last forever”.

“We are excited to enter into this historic partnership with MLB,” he added in a statement. “We are thrilled to create a new and unique experience for baseball fans.”

In an interesting addition to MGM’s previous deals, it has the opportunity to promote the partnership in Japan, where it hopes to build and operate one of three casinos allowed in the country following the passing of legislation enabling integrated resorts earlier this year.

The company will be an official partner at grassroots baseball events in Japan, while an interactive fan experience that celebrates Major League Baseball, MLB Road Show will tour throughout Japan.

Financial details of the deal were not released, however research published recently by the American Gaming Association (AGA) suggested US baseball could earn a collective $4.2bn annually by embracing sports betting.

While opening up to betting following the repeal of PASPA in May, Manfred and his organisation has been a leading advocate for so-called ‘integrity fees’. Last month MLB executive Kenny Gersh reiterated calls for the league to receive a 0.25% cut from casino sports betting.

Sara Slane, the AGA's senior vice president of public affairs, today said the betting sector's eagnerness to partner with rights holders shows its “continued commitment to protecting the integrity of both consumers and sporting competitions.” An opponent of federal legislation on betting, Slane added that “contracts remain preferential to statutes in all sports betting deals.”