SciPlay, the former social games subsidiary of Scientific Games, has begun trading on the Nasdaq Stock Market as part of its initial public offering (IPO). A total of 22m shares of Class A common stock have been made available at $16 per share. 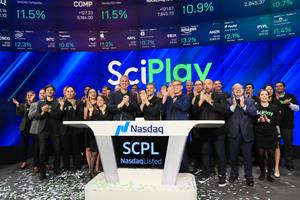 SciPlay, the former social games subsidiary of Scientific Games, has begun trading on the Nasdaq Stock Market as part of its initial public offering (IPO).

The digital games developer has launched 22m shares of Class A common stock on New York’s Nasdaq Global Market, with shares now available at a cost of $16 each.

SciPlay, which filed for permission to list its shares last month, has also granted the underwriters a 30-day option to purchase up to an additional 3.3m shares of stock at the IPO.

“SciPlay’s listing on the Nasdaq as a public company is a new beginning for us,” SciPlay CEO Josh Wilson said. “We believe that operating independently, with Scientific Games’ business support and access to intellectual property, will help us as we continue on our mission of becoming the no.1 casual mobile gaming company in the world.”

Nasdaq Stock Exchange president, Nelson Griggs, added: “SciPlay provides highly entertaining free-to-play games that millions of people play every day for their authenticity, engagement and fun. They are a global organisation powered by a culture of innovation that utilises data to enhance user experience.”

Scientific Games first revealed plans to spin off its social gaming division in November of last year, saying at the time that the IPO would allow it to “provide greater flexibility to pursue additional growth initiatives” and “unlock additional value” for its shareholders.

The supplier said that proceeds from the offering would be used to pay down the business’s net debt, which stood at $9.1bn at December 31, 2018.