In five years, Safer Gambling Week has become a key date in the British betting and gaming industry’s calendar. Deborah Roil, who has overseen the annual event that raises awareness of safer gambling and the safeguards available to players, speaks to ICE365 about its evolution. 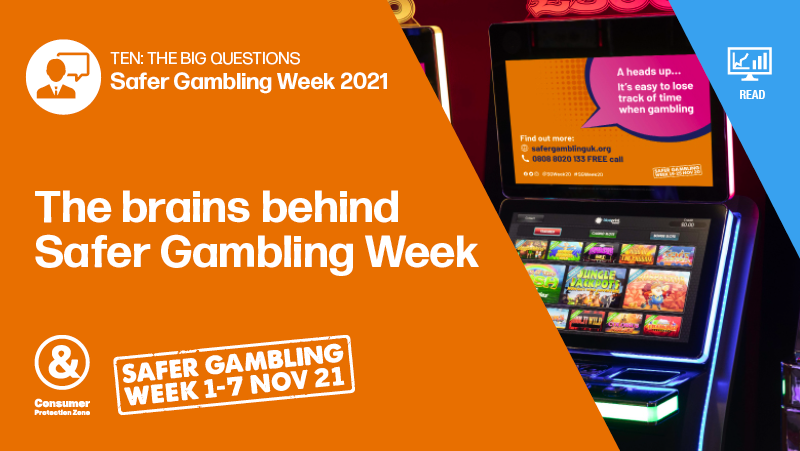 In 2014, Britain’s five gambling trade associations created the Industry Group for Responsible Gambling (IGRG), a new initiative to promote safe play across the industry. Deborah Roil, a consultant formerly of EY and then Development Director at Aspers, where she had helped establish the Community Action for Responsible Gambling (CARG) group, was put forward as a potential participant.

Having worked on projects for IGRG, Roil was invited to lead the organisation of what was then known as Responsible Gambling Week, with the first edition held from 12 to 18 October in 2017. “After doing the first one, they invited me to keep doing do the subsequent ones,” she says.

Last year it was renamed Safer Gambling Week, and has become a key week in the industry calendar. Roil says she is pleased with the progress since launch.

Over that time, the week has evolved from a primary focus on messaging and signposting to deeper industry engagement, through employee programmes, and more reflection across the sector on where improvements can be made, and how they can be implemented. “It’s expanding in terms of what is happening and in terms of who is getting involved.”

Participation among the operators has always been high; the 2017 edition saw the trade associations commit to having all operator members involved, even with a short lead-time. The first year had good uptake, Roil says, which improved in 2018, thanks to a better lead time. Since then it has built every year.

“From 2019 onwards, what we were seeing was a lot more organisations from outside the industry joining and participating,” she continues. “We were clear that it was for everyone that wanted to take part, and we’ve always been open for local authorities, GP surgeries, charities, and other organisations, such as manufacturing companies, looking at it from a workplace perspective, and it was really growing year-on-year from both the involvement of external participants, and in terms of engagement on social media.”

However, the 2020 edition took place amid the Covid-19 lockdown in Great Britain. The land-based industry was shuttered for much of the year, which meant betting shops were unable to do their usual full-window takeover, which gives the campaign huge visibility on the high street.

“We had the double whammy of there being no-one on the high street, and operators with not enough notice of lock-down  to get posters up in shop windows, or the staff to do it,” Roil says.

However, she points out, the social media activity carried out as part of Safer Gambling Week – which heavily involves the land-based sector – was similar to 2019. “We took that as a sign that if land-based wasn’t shut, we’d have had a good year of activity.”

And it still had an impact. Research suggests the campaign, from 19 – 25 November 2020, led to a significant increase in the use of deposit limit tools.

That has influenced the planning for Safer Gambling Week 2021. “We’re hoping that this time, by making use of deposit limit tools a specific ‘campaign within a campaign’ we hope to have greater uptake this year,” Roil says.

And while Safer Gambling Week is just one week of 52, that planning is a year-long undertaking. The date for the following year is set around the time the current year’s Safer Gambling Week kicks off. Then comes the evaluation, where feedback is gathered alongside independent market research. That is compiled into a report in January.

After a lull in February, the next year’s strategy is developed in March, new initiatives devised and collateral created. From June, that goes out to operators, and work begins with the week’s charity partners, YGAM and GamCare.

“I want to make it clear that this is a campaign not about throwing money at advertising. What this is, it’s a campaign that gets the whole industry involved,” Roil says. “We in the Safer Gambling Week team createa platform, with a strategy, the messaging, the branding and the collateral for Safer Gambling Week, and then communicate it.  The organisations participating in the week then take that platform and build upon it with a range of activities.”

In the months leading up to the week proper, there’s always “a last minute scramble”, when smaller operators that aren’t part of the industry associations come on board. “We’re a broad church.

“Anyone that wants to participate and adhere to the way the week’s run, we are happy to have involved – by that I mean we’re very clear that the week is not about promoting any business, it’s about promoting safer gambling. We’re really strict on how material is used.”

To further the promotion of safer gambling, each edition features a new initiative, with the Safer Gambling Forum 2020’s example. The uptake of deposit limits seen last year has prompted a campaign solely focused on limit-setting, while operators will specifically promote the tools and features they offer to customers, as well as running intensive employee programmes.

What the public will see, Roil continues, is sporting ambassadors supporting the campaign, through social media, while its partners YGAM and GamCare will each run a series of activities.

GamCare will publish research on general awareness and understanding of safer gambling, and a particular focus on women and gambling. It will also contribute to events such as the Safer Gambling Forum, and provide updates from the TalkBanStop campaign.

YGAM, meanwhile, will deliver training in partnership with Betknowmore to industry leaders and operators, as well as running educational programmes for teachers, youth workers, parents, faith and community leaders and health professionals.

But one of the most notable changes, and one which will run throughout the year, has already taken place. “When the fun stops, stop” has been replaced as the industry’s safer gambling mantra by “Take time to think”.

Roil notes that change is more a coincidence of timing rather than a part of Safer Gambling Week, but says it illustrates the effort and the thought that goes into player protection.

“[It] is a process that has gone through a lot of research and collaboration with stakeholders, and shows the industry wanting to do something effective,” she explains. “We see that with Safer Gambling Week as well – we talked about the timing of it, but it’s highly appropriate that the industry is out there doing what it can to be as effective as possible.”

“Take time to think”, she says, will be a big step-change, and the work undertaken to come up with that phrase has informed the Safer Gambling Week messaging.

“One of the challenges we have it’s an industry-wide education campaign. So trying to get messaging that is actually effective across a range of products and audiences is quite a challenge,” she says. Since its inception the phrase “Let’s talk about…” has always been part of its messaging, but the lead term has changed from ‘responsible’ to ‘safer’ gambling alongside the industry as a whole.

Further changes have been made over time, based on independent market research of the Safer Gambling Week messaging, and other research projects  conducted by operators, supported by input from treatment providers and charities. This has seen it tweaked, rather than overhauled, influenced by research undertaken for the “Take time to think” campaign. It goes as far as tone.

Instead of a ‘parent to child’ tone, Safer Gambling Week aims for a ‘peer to peer’ tone.

However, gambling has always been an emotive issue, something particularly true in recent years. Safer Gambling Week 2021 arrives with the Gambling Act review in motion, and the industry facing fierce criticism from some corners of the media and politics.

“I think that’s really important. This is the fifth year of the campaign and the objectives are still the same. [We] haven’t altered what we are doing because of what’s happening in the press or Westminster.

“And I mean that in a positive sense; this has always been the plan, to keep growing it, to add new and different things, but the core approach that the trade associations have always respected and understood is this is a long-term initiative,” she adds. “When you have awareness campaigns, you don’t go into them as a one-year thing; it’s a commitment for the longer term.”

One criticism levelled at Safer Gambling Week is that it’s one week a year, but that’s far from the case. “What I see working with operators is people committed year-round, and working on initiatives all year round, and the point of the week is to highlight to the public and customers what information is available and where to get it.

“You don’t do that 365 days a year – it loses its impact. It’s about highlighting it to ensure it has an impact. It’s not a reflection that it only happens once a year.”

After more than 20 years in the gambling industry, Roil believes the last five to eight years has seen a huge shift in operators’ approach to safer gambling – the week is just one small part.

But that small part has grown rapidly.  “It’s literally gone from nothing to something that’s a completely embedded and accepted part of the calendar,” she says.

“People are asking about how they can get involved. I was really pleased at how it was growing, and how organisations outside the industry were keen to get involved in safer gambling.”