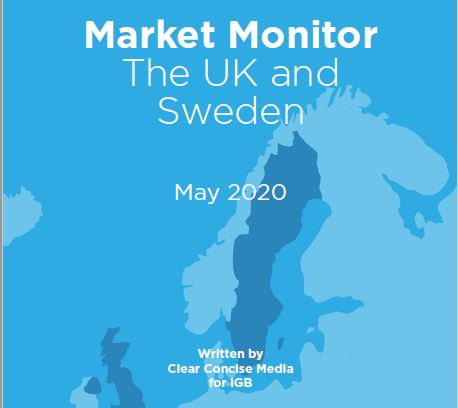 It would be easy to put the industry’s current problems down to the unexpected novel coronavirus (Covid-19) virus that spread rapidly throughout the world.

But the pandemic has done more than just put the brakes on the sports betting vertical and have a huge revenue impact on the wider igaming market. It has highlighted and exacerbated issues that were already at the fore in the gambling market.

The debate over gambling advertising was already front and centre in many jurisdictions and has become even more so since lockdowns were put in place.

Gambling critics have used the spectre of bored housebound consumers piling into online gambling to drive home their demand for advertising bans and regulatory reform and in some ways, they’ve been successful.

Regulators in a number of European countries have taken action to curtail gambling during the lockdown period and there is talk of further clampdowns in the UK and Sweden, the countries that are the focus of this Market Monitor.

In the UK, the virus came at a time when the market was already contracting and when voices from groups such as the Gambling Related Harm All Party Parliamentary Group were growing increasingly louder.

The efforts of the Betting and Gaming Council in co-ordinating a voluntary ad ban during the crisis have done little to appease the industry’s detractors, who now want the ban to be made permanent.

In Sweden, proposals by authorities to further limit deposits and ban betting on lower league football could potentially lead to channelisation falling even further in the relatively newly regulated market.

A recent report from Copenhagen Economics provides some compelling and worrying evidence to suggest that rather than driving out the grey market operators, the regulator’s actions so far might be having the opposite effect.

All of this points to the idea that the regulatory and legislative responses to gambling during the coronavirus crisis will be just as important as the lifting of lockdowns and reopening of sporting events in determining how the industry comes out of this crisis.