Sports betting brand Sportsbet.io has agreed to become the main shirt sponsor of Watford, in a deal that the Premier League football club said represents a record agreement. 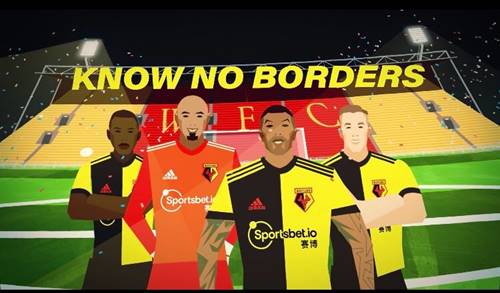 Sports betting brand Sportsbet.io has agreed to become the main shirt sponsor of Watford, in a deal that the Premier League football club said represents a record agreement.

The Sportsbet.io logo will now appear on the front of Watford’s playing jerseys and training kit for the next three years, with the deal covering the 2019-20, 2020-21 and 2021-22 seasons.

Sportsbet.io branding will also feature on various surfaces inside the team’s Vicarage Road home stadium throughout the partnership.

“Our desire to increase our global reach while continuing to make our fans proud by doing things differently in the Watford way is fully supported by Sportsbet.io,” Watford global strategy and partnerships director, Spencer Field, said.

“We are thrilled to have found a partner that matches our ethos by looking to disrupt the betting industry and offer their customers a fun, fast and fair experience.”

Justin Le Brocque, head of sportsbook marketing at Sportsbet.io, added: “The Premier League is the most watched sports league in the world, so we are absolutely delighted to announce a major sponsorship deal with one of its most celebrated teams.

“We share the club’s desire to combine passion and innovation to reach the top, and we look forward to doing everything we can to support Watford next season and beyond.”

Meanwhile, BetConstruct-run VBet has brokered a deal to become the official betting and gaming partner of Premier League club Arsenal.

VBet will work with Arsenal to offer fans a range of content and exclusive offers, while club legend Ray Parlour will become an ambassador for VBET.

In addition, VBet will become the official presenting partner of The Breakdown social video that provides fans with a tactical and statistical analysis of games.

Terms of the deal were not disclosed, but it was confirmed that BR88 branding will feature on players’ shirt sleeves for at least the 2019-20 season.

The agreement comes after Villa last week unveiled Asian betting and gaming operator W88 as its new main shirt sponsor. W88 had a similar deal in place with Wolverhampton Wanderers for the 2018-19 season, but the club ended the relationship in order begin a new partnership with ManBetX.