Michigan, New York and Washington DC headline this month’s roundup, with the latter becoming the seventh US jurisdiction to legalise sports betting 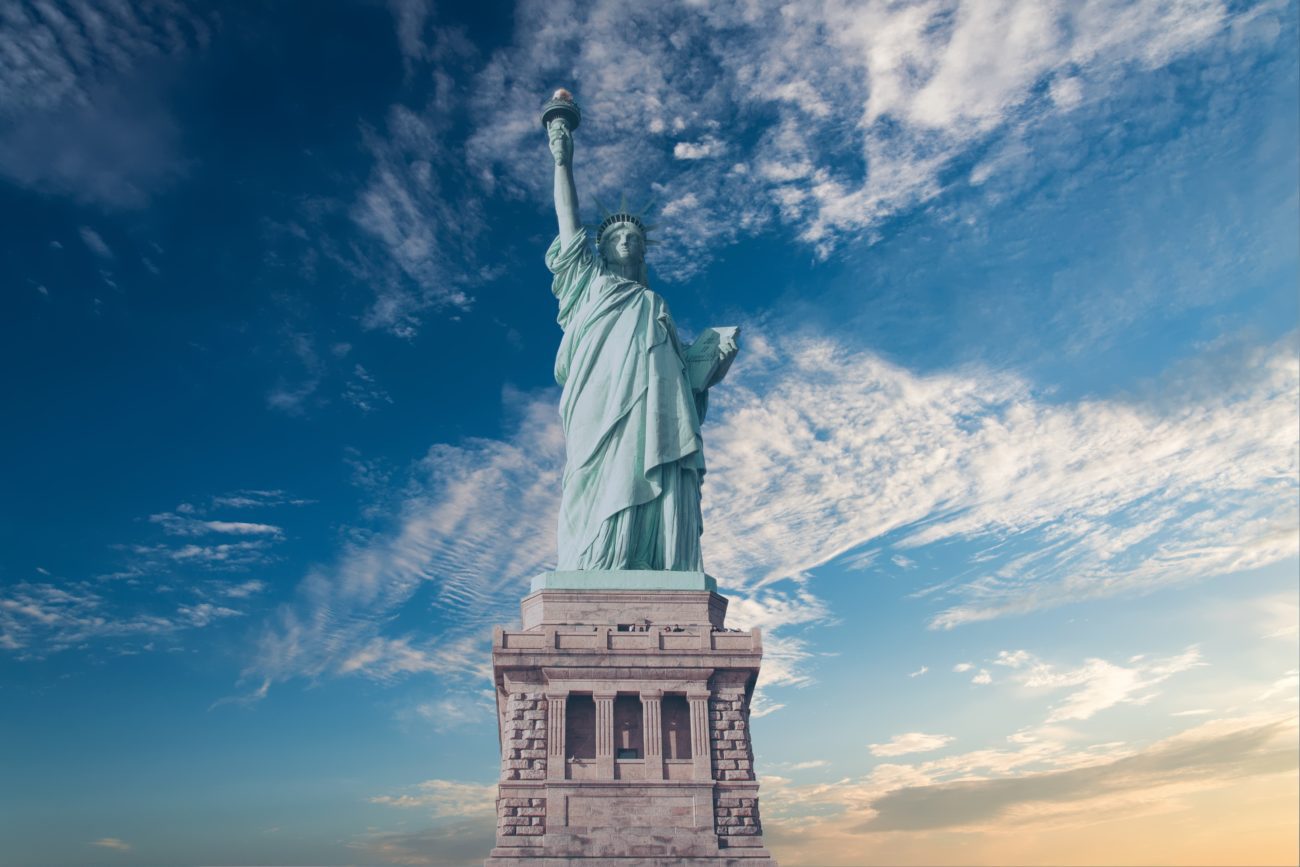 Michigan: Snyder puts the brakes on
In December, outgoing Governor Rick Snyder vetoed Rep. Brandt Iden’s House Bill 4926, the Lawful Internet Gaming Act, following its approval by the Michigan Senate and House. Under five-year licenses, the state’s tribal and commercial casinos would have paid 8% of GGR generated from games such as poker, blackjack, slots and other card and table games. This had been approved alongside HB5881, which would have amended the 1996 Michigan Gaming Control and Revenue Act and levied an 8% GGR tax on sports wagering. Snyder said in a statement that the bills had “unknown revenue implications” and needed closer studying. Iden told Sports Handle that he was “surprised and disappointed.”

Pennsylvania: Parx goes live
On 10 January, the Pennsylvania Gaming Control Board (PGCB) gave Parx Casino permission to launch its Kambi-powered on property sportsbook. Kambi now powers three of the state’s four live sportsbooks. Penn National Gaming’s William Hill-powered offering at the Hollywood Casino launched in November and the Rush Street-operated, Kambi-powered SugarHouse and Rivers casinos went live on December 15. The Keystone State became the fourth to fully legalize online gambling in October 2017 after Governor Tom Wolf signed an expansive gambling package into law.The legislation allows for the regulation of online poker, slots and table games within the state’s boundaries.10 of the state’s 13 approved casino operators have applied for licenses in at least one of the four categories. 11 interactive gaming licenses (five online poker, three online slots and three online table games) remain up for grabs among licensed operators. Each interactive gambling licensee is allowed to partner with multiple interactive platforms or skins.

New York: Online poker returns
In early January 2019, Chair of the Senate Racing, Gaming and Wagering Committee, Senator Joseph Addabbo, filed Senate Bill 18, which aims to allow all those aged 21 and above to play poker online. S00018 looks to issue up to 11 online poker licences, with only licensed video lottery gaming facilities and Class III (tribal) gaming licensees eligible. Each licensee would have to pay an up-front fee of $10m for a 10-year licence, as well as paying a 15% tax on gross gaming revenue. Despite the cap on the number of available licences, each entity would be permitted to operate an unlimited number of skins under its licence, provided each partner is approved by the New York State Gaming Commission. The legislation however includes a so-called bad actor clause, which would block companies that offered online gaming in the US after December 31, 2006 – when the Unlawful Internet Gambling Enforcement Act of 2006 (UIGEA) was enacted – from participating in the market.

Washington DC: Sports betting passed but subject to hearing
Became the seventh jursidiction to legalise sports betting after the D.C. City Council approved the Sports Wagering Lottery Amendment Act on 18 December 2018. It permits retail and digital sports betting in the capital, which has a population of almost 700,000 and teams in each of the major sports leagues. The bill will only allow mobile wagering via the D.C. Lottery’s Intralot powered platform. However, a number of designated facilities, such as the city’s major sports arenas, will be able to sign their own partners which will be able to offer their mobile services to customers within a two-block exclusivity zone, inside of which no competition is allowed. The four stadiums that can apply for Class A licences and offer betting are the 82,000-capacity FedEx Field, the 41,000-capacity Nationals Park, and Capital One Arena and Audi Field which can both hold just over 20,000 fans. The emergency resolution which would have enabled the Act to be implemented within months was however withdrawn by DC City Council chairman Phil Mendelson on 8 January 2019. meaning a public hearing will be held later this year. This hearing will examine matters such as whether the DC Lottery should be allowed to gift its sports betting technology supply contract to Intralot without running a procurement process. 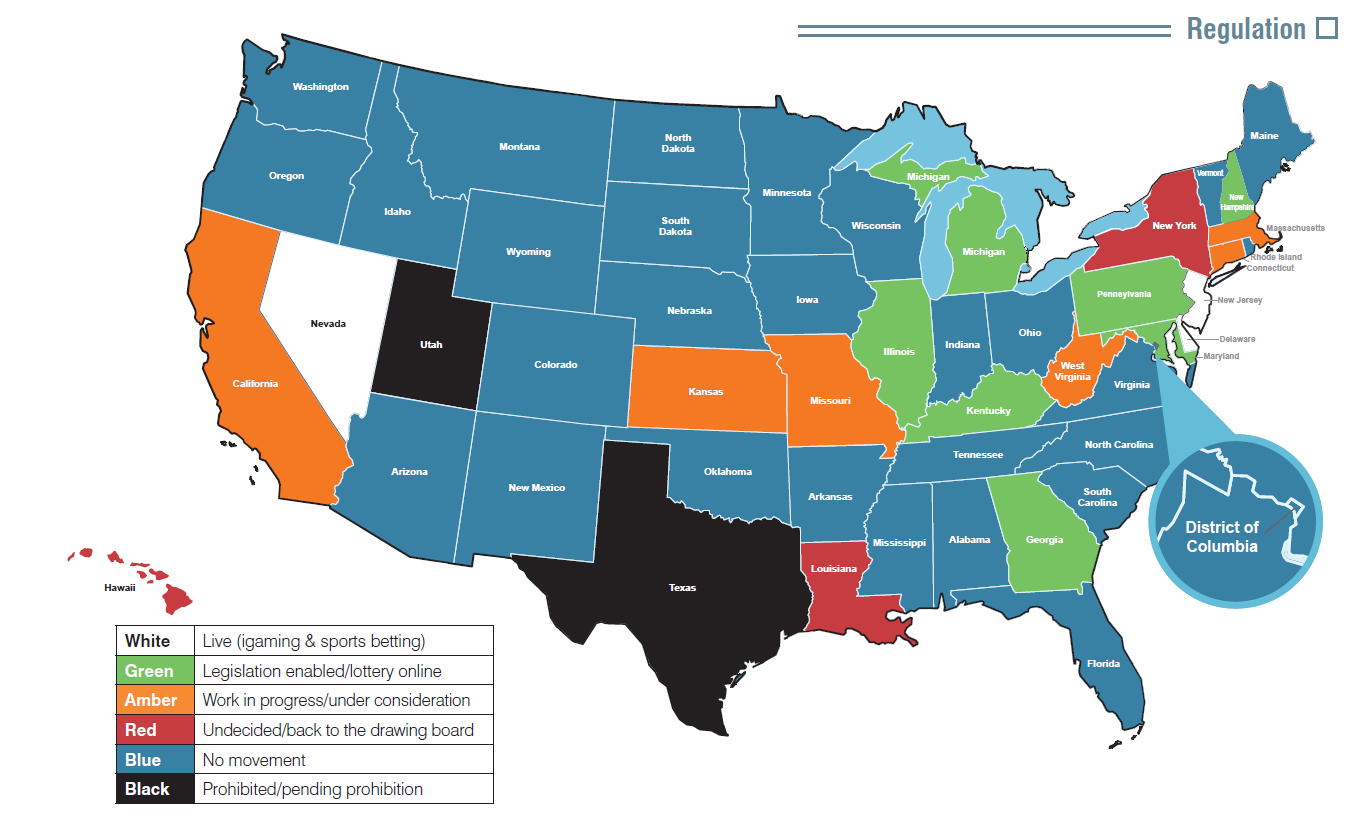 Missouri: Two legislators in Missouri have pre-filed sports betting bills for the 2019 legislative session. SB 44, introduced by Sen Denny Hoskins, presents an interesting twist by foregoing the typical integrity fee in favor of a quarterly 0.5% fee appropriated for upgrades to the state’s sports stadiums. The bill would also authorize sports betting via Internet and mobile devices.  The other measure, HB 119, introduced by Rep Cody Smith, would authorize interactive betting, but only for people who are physically located at licensed facilities.

Kentucky: Staying on track
Members of the Interim Joint Committee on Licensing, Occupations, and Administrative Regulations held a hearing on 12 October to discuss the authorization of sports betting in the state. The proposition has been well received in the legislature, and the outlook moving forward remains positive.Topics covered during the October hearing ranged from tax rates to integrity feels to mobile betting. A bipartisan group of legislators is expected to pre-file a sports betting bill prior to the start of next year’s legislative session. In September, the National Football League, Major League Baseball, the National Basketball Association, and the PGA Tour all registered to lobby during the 2019 General Assembly and are expected to push for a 1% integrity fee, which Committee Chairman Adam Koenig adamantly opposes. Provided the integrity fee doesn’t become a stumbling block, Kentucky could authorise sports betting as early as January.

MA, KS, NY, OR also hopeful for 2019
Efforts to fast track a sports betting measure in Massachusetts fell short in 2018, but Rep. Joe Wagner believes his initiative to legalise will be up for a vote in early 2019. Gov. Charlie Baker says sports betting will be addressed in January.

Likewise, legislators in both Kansas and Missouri considered multiple sports betting bills in 2018, and their sponsors are hopeful for approval in 2019. In New York, the sponsor of a Senate bill that would create rules for sports betting in casinos and online, John Bonacic, is leaving office at the end of the year, and it is unclear who will

take on the initiative once he’s gone. Finally, Oregon’s state’s lottery is hoping to expand its mobile gambling offering to include sports betting by the third quarter of 2019, but the lottery will first need the legislature to approve a taxation scheme. No bills have surfaced yet.

Indiana: Signs of Life
Following a hearing on 19 October, the Interim Study Committee on Public Policy voted to recommend legislation authorising sports betting to Indiana. While the vote would indicate that the state is taking steps toward legalisation, Committee Chairman cautioned that there are “many perils down the pathway before it becomes law.”

Illinois – Slow and steady
The outlook for regulated sports betting in Illinois remains good, but lawmakers are in no rush to push through legislation. Rep. Lou Lang cautioned at a hearing held on 17 October that the state should go slowly and make sure they get it right, and he referenced Pennsylvania’s unusually high 36% sports betting tax as an example of errantly moving forward without fully understanding the economics of the industry. Lang also said they need to give careful consideration toward including an integrity fee. He rejected the idea of paying leagues for the “privilege of showing your games,” but is open to a fee that actually contributes toward preserving integrity in sports. Finally, Lange urged caution in deciding who should be allowed to offer sports betting, pointing out that a state that houses almost 30,000 video gambling machines must be mindful of providing too much access to walk-up betting.

Ohio: Midterm election not good for sports betting
The election of Mike DeWine as Ohio’s next governor does not bode well for advocates of regulating sports betting. DeWine has consistently opposed efforts to legalise sports betting, while his opponent, Richard Cordray had indicated that he would consider legalisation.
In August, Ohio Senate President Larry Obhof said Senate Bill 316, which would provide for legalised sports betting in the state, would be studied in a committee after the midterm elections in November. Obhof further predicted that the bill would not likely hit the Senate floor until 2019. Meanwhile, questions have been raised about whether the legislature even has the right to legalise sports betting in Ohio. The state’s constitution prohibits gambling, except under specific circumstances. Other forms of gambling, such as casinos, were only legalised through a constitutional amendment in 2009, and Senator Obhof suggested that sports betting would need to be amended into the constitution by a vote in a similar manner.

Florida: At the mercy of voters
The passage of Amendment 3 on the November ballot makes the legalisation of sports betting a much more difficult task. The amendment puts gambling expansion in the hands of voters, via citizen initiatives, rather than legislators. Because the initiative process requires 60 percent of the votes for passage, the prospects for authorised sports betting in the state are greatly diminished.

Colorado: Still an issue for voters to decide
Despite Attorney General Cynthia Coffman’s determination that sports betting is not subject to state constitutional restrictions, at least one of the legislators who supports legalisation is of the mind that the issue should still be decided by voters. In October, Rep. Cole Wist told the Denver Post that, while he is in favor of regulated sports betting, “I think it’s important to go back to the voters and make sure it’s something that they want.”  Rep. Wist and Rep. Alec Garnett are hopeful of getting sports betting to a statewide vote in 2019, which would mean legal sports betting would not become a reality until at least 2020. Meanwhile, gubernatorial candidate Walker Stapleton, a Republican who favors sports betting regulation, lost in the November election.

CA, LA, MD, SC are years away
Proponents of sports betting in California have their sights set on the 2020 ballot. The state has approved signature collection for the most recent measure, which was introduced in June 2018. To land on the 2020 ballet, the proposal needs to garner 585,407 signatures from registered voters by February 2019.

In Louisiana, Sen. Danny Martiny made multiple efforts to get his sports betting bill on the agenda during special sessions, but Gov. John Bel Edwards would have nothing of it. Martiny said he’ll make another push in 2019 but is not optimistic.

Maryland’s legislature has already passed a bill that would authorise sports betting at the state’s casinos and racetracks, but a referendum is necessary for legalisation to become a reality. This year they failed to pass legislation that would put sports betting on the ballot, which means the earliest it could come up for a vote is 2020.

Despite the introduction of a regulatory bill in South Carolina, the state is likely years away from authorising sports betting, which would require a constitutional amendment to become a reality.