In this week's State of the Union, in partnership with Segev LLP, we find Rhode Island poised to legalise online wagering and West Virginia set to legalise online gaming, with bills in both states awaiting approval from their respective Governors. Elsewhere, Michigan Representative Brandt Iden has resumed efforts to legalise online betting and gaming in the state, new bills have been filed in Connecticut and Kansas, and the AGA is urging states to innovate when they regulate.

In this week’s State of the Union, in partnership with Segev LLP, we find Rhode Island poised to legalise online wagering and West Virginia set to legalise online gaming, with bills in both states awaiting approval from their respective Governors. Elsewhere, Michigan Representative Brandt Iden has resumed efforts to legalise online betting and gaming in the state, new bills have been filed in Connecticut and Kansas, and the AGA is urging states to innovate when they regulate.

S37, introduced in January by Senate president Dominick Ruggerio and passed by the Senate in February, allows the Twin River casinos in Lincoln and Tiverton to launch online and mobile sports betting.

The casinos, currently the only places permitted to offer land-based betting in Rhode Island, must only offer the online services to customers that have registered for an account at the venue. They must also use geolocation technology to verify the players are betting within the state’s borders.

House Bill 2934, which was introduced by Delegate Jason Barrett on February 12, has been passed by both chambers of the West Virginia legislature. Having passed the House in February, it was then passed by the Senate on March 8, the second-last day of the 2019 regular session by a vote of 26 in favour, and seven against.

As a result of minor tweaks made in the upper chamber, it then returned to the House for final approval, which was secured on March 9, with 78 Delegates voting in favour, 18 against and four abstentions.

It now passes to the Governor for final ratification, though Justice can allow the bill to pass into law without his signature, as he did with the state’s sports betting regulations. Should it become law, West Virginia would join Delaware, Nevada, New Jersey and Pennsylvania in regulating online gaming.

New Kansas bill – without integrity fee – filed
Kansas lawmakers are to run the rule over a new bill that would legalise sports betting in the state, but omits the integrity fee proposed by a competing bill.

Filed by the Committee on Federal and State Affairs, Senate Bill 222 would allow the Kansas Racing and Gaming Commission to issue licences to gaming facilities and racetracks interested in offering sports wagering services.

Punters would be able to place bets in-person at licensed venues, as well online or via mobile from anywhere inside the state’s boundaries. Wagering would be permitted on all professional and collegiate events.
In order to apply for a licence, the venue in question would need to be approved by the Kansas Lottery. The bill does not state how much licences would cost.

Licensees would be permitted to enter into a management contract with a third-party partner, subject to approval from the Commission.

The bill said any management contract would be subject to a provision whereby the state would receive 6.75% of sports wagering revenue. This would be paid into the Lottery Act Revenues Fund. 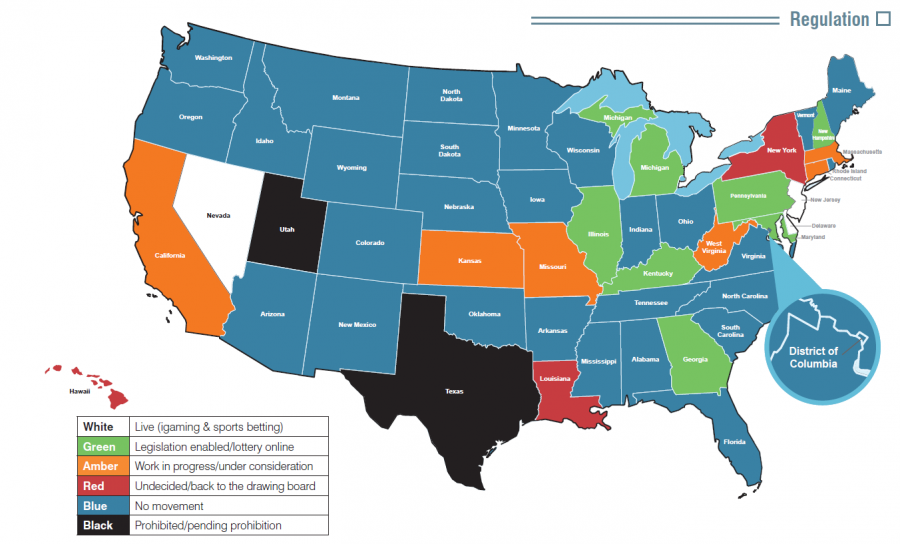 Iden leads new igaming push in Michigan
Lawmakers in the Michigan Senate and House of Representatives have launched new bids to legalise online gaming in the state, following the eleventh-hour veto of legislation by former Governor Rick Snyder in late 2018.

Democrat Senator Curtis Hertel has filed SB0189, while Republican Representative Brandt Iden, whose 2018 bills were vetoed by Snyder, has filed H4311 in the lower chamber.

Iden’s bill appears to be almost identical to his 2018 proposal, with tribal and commercial casinos eligible for igaming licences, and the Division of Internet Gaming to be created to regulate the sector. Licences would cover poker, table games and online slots, and the Division would have the option to allow online sports betting.

The city in which the licensee is based will receive 30% of tax revenue, to be used for programmes to improve quality of life for citizens, with 5% invested in the State School Aid Fund. A further 5% would go to the Michigan Transportation Fund, and 5% would also go to the Michigan Agriculture Equine Industry Development Fund.

The remaining 55% would go to the Internet Gaming Fund, crated through the bill, with $1m of this total to go to the Michigan Compulsive Gaming Prevention Fund, and the remainder to be used to cover regulatory costs.

NJ looks to enshrine prohibited betting punishment in law
A bill from New Jersey Assemblymember Ralph Caputo would formalise the penalties imposed on licensees that offer odds on sporting events for which betting is prohibited, with the guilty parties facing fines and automatic licence suspensions.

Having been introduced at the end of February and assigned to the Assembly Tourism, Gaming and the Arts Committee, it now progresses to a second reading in the chamber. The bill was approved by the committee, with six members voting in favour, one abstaining and no votes against.

The bill aims to have licensed operators found to have taken bets on prohibited events refund all amounts wagered, as well as paying a fine of between $20,000 (£15,300/€17,800) and $10,000. They will also have their sports betting licence suspended for a period of up to 10 days.

New Jersey’s sports betting regulations currently define a “prohibited sports event” as any collegiate sport or athletic contest taking place within the state, or any involving a New Jersey college team, regardless of where it takes place. However, offering markets on tournaments or leagues in which a New Jersey college team permits is not banned, nor is betting on collegiate sports taking place outside state borders banned.

South Dakota sports betting efforts in vain?
Punters in South Dakota may have to wait another year before they can place legal sports bets after lawmakers voted down an amendment that would have allowed for regulated sports wagering in the state.

Senate Joint Resolution 2 (SJR2) proposed amending the state’s constitution to allow residents to bet on sports events from inside the city limits of Deadwood.

The amendment was passed by the state Senate , but has failed to secure enough votes to progress in the House of Representatives.

Despite the South Dakota House voting 33-32 in favour of moving SJR2 forward, with five members absent, this is below the 36-vote majority required by state law in order for the amendment to advance.

Unless the House decides to vote again on the measure, this would be the end of efforts to legalise sports betting in the 2019 session, meaning no more proposals can be introduced until the 2020 legislative session begins.

Verrengia’s HB7331 allows in-person wagering and remote betting via electronic wagering platforms, with oversight for the market entrusted to the Connecticut Department of Consumer Protection.

Those aged 21 years old and above will be allowed to bet on sports, with operators required to offer voluntary self-exclusion and the ability to set spending limits. It also blocks anyone involved in professional sports from team owners to employees of sports governing bodies, from betting.

Operators will be taxed at 9.89% of gross revenue, with the state to establish the Sports Wagering Account, a new fund alongside the Connecticut General Fund. Money raised from sports betting will be deposited in this fund, and used to cover the Department of Consumer Protection’s regulation- and licensing-related costs.

At the end of each year, half of 1% of money in the account will be allocated to Connecticut’s five Regional Behavioral Health Action Organizations, as designated by the Commissioner of Mental Health and Addiction Services. The remaining money will then be transferred to the state General Fund.

HB7331 will also create a new compact with the state’s tribal casino operators, the Mashantucket Pequot and Mohegan tribes. The pair currently hold the exclusive right to operate casino gambling in the state, and Verrengia proposes creating a new sports betting-specific compact. This would have to be approved by the US Department of the Interior, under the terms of the the Indian Gaming Regulatory Act.

AGA urges states to innovate when they regulate
The American Gaming Association (AGA) is urging more states across the US to update their gambling regulations to ensure the rules are fit for purpose in what it sees as an evolving marketplace.

In a new white paper entitled ‘Advancing Regulatory Modernization: Building on a Record of Success’, the AGA cites how regulatory changes across a number of states have had a wider impact on the market.

Regulators in Nevada have changed gaming rules to allow licensed operators to set up single-account play across all verticals, so that consumers do not need to register for multiple account in order to access different services.

Both Ohio and Michigan have moved to streamline the process of installing and removing gaming machines by amending existing regulation, with Missouri also set to take similar action.

In addition, regulatory authorities in Pennsylvania and Mississippi have made it easier for investors to get involved with gaming by increasing the ownership share that triggers the need for an institutional investor to acquire a gaming licence.

“By watching other jurisdictions to identify promising reforms, many are finding new ways to approach their vital mission,” the AGA said.

“Only through constant re-examination of these regulatory standards and many others can regulators achieve their goal of ensuring a successful gaming industry that operates in the public interest while incorporating evolving technologies in today’s fast-paced economy.”