A sports betting boom is clearly sweeping across North America. As state after state start to legalize the practice, operators across the continent are trying their best to get in on the ground floor. The challenges brought about by these new markets were discussed by those within the tribal gaming sector. 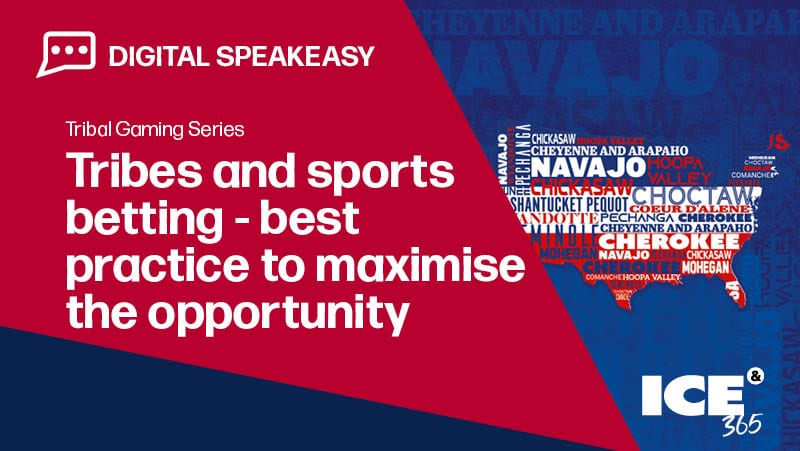 The quotes below are a selection from the digital speakeasy held on 14 April as part of the ICE 365 Tribal Gaming content series, sponsored by Kambi.

The challenges brought about by these new markets were discussed by those within the tribal gaming sector at the ICE 365 Digital Speakeasy on the topic, held on 14 April. Digital speakeasies are free-flowing, informal conversations, limited to a small group of participants, who meet digitally to discuss topics of interest.

It’s no surprise that sports betting has become a top priority for operators, suppliers and regulators across the continent.

The popularity of the sports betting market is undeniable, and those in the industry have already started to work on attracting betting customers.

For many attendees at the tribal gaming speakeasy, this means appealing to casual customers.

“There’s traditional sports bettors that have been doing this for a very long time and enjoy a sophisticated system – parlay bets and prop bets and different things like that – but what we’re hoping for is something simpler, easy to use, with a very friendly interface for people that like to watch sports and may be new to betting,” one attendee said.

While catering to bettors has become an important goal for reaching a large number of players, as a revenue source betting still lags behind other verticals.

“We brought sports back – we had it in the past,” another participant explained. “It was grandfathered in a smaller capacity but we brought it back because we had heard from players that they had wanted it to come back.

“We knew that it wasn’t going to be a big revenue driver… so rather than focusing more on revenue, it was more focused on how do we get out there in this new day and age.”

However, due to the volume of customers interested in betting, betting can be a useful tool in player acquisition. The future of the market appears to lie in the hands of sports bettors, even if they may not be the most prominent source of revenue.

“We are seeing in conversations with operators across the US and North American general the need to make sure that you have an integrated product offering, so that you can utilise sports betting as an acquisition channel and move those customers across the other verticals,” one pointed out.

Multiple speakeasy attendees said they have started to realise that across the board that it’s cheaper to acquire sports betting customers than other group, such as lottery or casino players.

The task moving forward is now for providers to create sports betting platforms that are easy for customers to understand and use, and to get these players interested in other verticals after this initial relationship has been established.

“Over time, we imagine those betters would become more sophisticated in their betting techniques and we feel that that is a great way to start to bring those people into the fold of all the other wonderful things that a casino resort has to offer. We believe that we can trigger a lot of brick-and-mortar trips from there.”

The new vertical is proving to be a steep learning curve for everyone involved, especially the market regulators.

Many said they were ready to launch igaming before the repeal of the Professional and Amateur Sports Protection Act (PASPA) meant sports betting started to rear its head.

Others find themselves starting from scratch, with one mentioning going from “being the expert to being the student all over again”, and while learning something new is beneficial in the long run, it provides its own set of challenges.

While different states are trying to find out what works best for them, regulators are happy to borrow from each other in order to find the best solutions.

“As a regulator, I have to wait until some bits of information from the final legislated bill are actually handed down to me, so I have a working tool to start drafting the operations regulatory controls,” a regulator in attendance said.

“I think that the best practice is to look at what other jurisdictions are doing well, continue doing that and then some of the things that seem to be tragic or constrictive can be revisited. We can think of another method that we can use to accomplish the same compensating control without being so intrusive.”

Whilst company growth and revenue may be top of the agenda for commercial retailers, attendees said tribal governments are looking at the big picture.

Those who have had regular contact with both sides said it was clear that the goals of the two differ greatly.

“It’s a little bit different than the commercial respect where everyone cares about profits, but they have to answer to different types of stakeholders, whereas tribal operators are just trying to take care of their community and their government.”

Due to the fact that tribal governments are deeply entrenched into the communities they serve compared to commercial operators, many said they have no choice but to be thinking in the long term.

This applies to how tribes operate sports betting too, as they attempt to “future proof” their betting operations.

“We, we know that the sports betting industry is in its infancy, so there’s a big push around big multi state operators that are racing to the bottom. So what do you do to future proof your business that’s giving back to your community over the next 10 to 20 years? It’s not just looking at that so we’re doing a lot of work with our partners around how to maximize that revenue across a longer period of time.

“It’s not just about the next two years, it’s how to have something in place that’s going to be of a long term benefit to communities.”