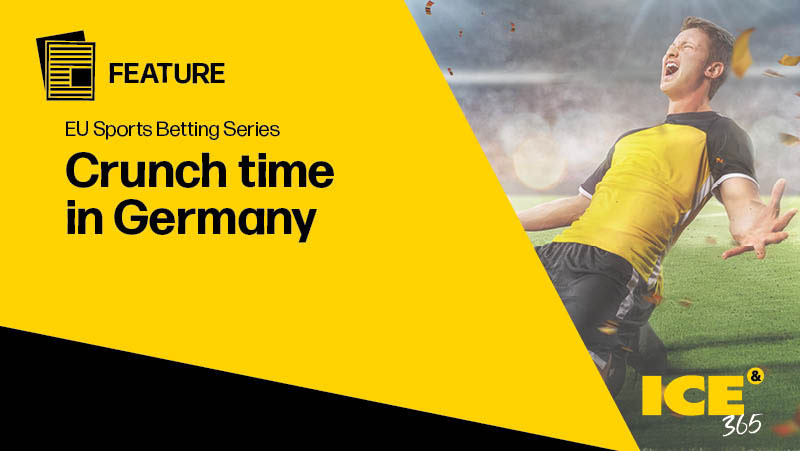 After Germany’s sports betting licensing stalemate was finally broken in October 2020, the process has once again ground to a halt. Furthermore, retail operators are facing a new challenge, as states look to impose strict minimum distance requirements between outlets. Robin Harrison explores the challenges facing the industry.

When the Regional Council of Darmstadt issued Germany’s first federal sports betting licences in October 2020, Hesse’s Minister of the Interior Peter Beuth hailed the development as ending “a long stalemate in Germany’s regulation of gambling”.

“Going forward, the following applies: those who adhere to the important rules for the protection of players and minors can also offer legal sports betting,” Beuth said at the time. “Only with a strictly controlled offer can the goals of the State Treaty on Gaming be implemented and the illegal growth of the black market ended.”

Fast forward to 2021, and the process has again stalled. After an initial flurry of approvals, the number of new licences being granted has slowed to a trickle. As of March 2021, a total of 28 licences have been issued, though this narrows to 22 once multiple certifications issued to one operator are taken out. And the vast majority were issued within one week in October last year.

At least 30 operators had filed applications by February 2020, with a further 20 telling the Regional Council they intended to apply before the process was halted by a legal challenge. This suggests that less than half of all applicants have secured a licence.

“There are clearly a number of problems, and they pertain to the progress of the licensing procedure,” Luka Andric, managing director of operator association the Deutscher Sportwettenverband (DSWV), says.

“The main concern is that the licensing process has sort of ground to a halt.”

Andric adds that this is not the fault of the Regional Council, a body that despite eight years of delays and recriminations has escaped significant criticism from the industry. He points out the authority has pre-approved many of the operators that have submitted all their paperwork.

“But […] the Regional Council cannot take a final decision alone – it has to present these applications to the Glücksspielkollegium,” he says, adding. “And that’s where the process got stuck.”

The Glücksspielkollegium (GSK) has long been a controversial component of Germany’s regulatory framework for gambling. It has been ruled unconstitutional by state courts, offers little clarity into its decision-making process and has no real accountability.

“The GSK is a body consisting of 16 bureaucrats, and 11 have to agree to take a positive vote,” Andric explains. “That means if you have six Länder [states] who disagree on an issue you can block any process, and that’s what’s happening with the licence applications.”

He says a small minority of Länder are using the GSK’s voting system to slow down decision-making by asking “minuscule and random” questions about legal interpretations to obstruct the licensing process.

While this may have brought the licensing process to a standstill, it has not stopped sportsbooks from offering their services. This means that the 22 online licensees are subject to the stringent operating conditions, such as a ban on most in-play markets, a €1,000 spending cap for players and a halt on marketing.

Others in the licensing funnel – or those that have not applied for certification – have continued to operate unhindered by these controls.

“The small amount of enforcement work the authorities are actually doing is spent on checking and double-checking licence holders rather than going for rogue operators who have not applied for a licence,” Andric points out.

This means the market is being distorted in favour of the illegal operators, he continues.

“What we hear from our members who have received a licence is that they see a lot of their revenue shift to non-licensed operators,” Andric explains. “I cannot quantify that – we are actually discussing with our members how best to quantify that more precisely, but what we hear is consistent across the board.

“There’s a considerable economic impact on those that already have licences, and they are concerned that unlicensed operators are stealing market share.”

DSWV president Mathias Dahms has even warned of a “mass exodus” to the offshore market. For online slots and poker, currently subject to a transition period in which operators are expected to adhere to the terms set out in the Glücksspielneuregulierungsstaatsvertrag (GlüNeuRStV) due to come into force from July 2021, the situation is worse. That legislation took a major step forward last week, after it was ratified by 13 state parliaments, which clears it to come into force in those Länder.

For these verticals, the DSWV has estimated that members’ turnover is down by an average of 54%, as players look to avoid measures such as a €1 per spin cap on slot stakes and a minimum five-second spin duration by shifting offshore.

And it does not look likely that 2021 will see a recovery – far from it. Not only are shops in all Länder still shuttered as a result of the novel coronavirus (Covid-19), but operators also face having their estates thinned out by legislation imposing minimum distant requirements between outlets.

With land-based gambling the preserve of each state government, rather than managed federally as is the case online, operators already have to navigate a fragmented regulatory framework. But the minimum distance requirements are becoming increasingly problematic in an increasing number of states.

For example, the Berliner Spielhallengesetz, in the country’s capital, states that gaming halls must be 500 metres apart, and that none can be within 200 metres of a school or youth facility. While the target is gaming halls, and the State Treaty prohibits offering both slots and betting in one facility, Andric says the controls have “spilled over” from one vertical to the other.

“Cities or local councils tend to treat betting shops in the same fashion as slot machine parlours,” he says.

Berlin, he says, is an “extreme” example, and one that will force the vast majority of land-based gambling facilities to close. However Rheinland-Pfalz is pursuing a similar move, aiming to impose a 500 metre minimum distance between venues, and prevent any from being located within 500 metres of schools or youth facilities.

Dr Bastian Scholz, a senior policy advisor to the DSWV, points out there is no scientific evidence to suggest these measures have a positive impact on player or youth protection.

Instead, he describes minimum distance requirements as “an example of symbolic policy making”.

“In recent years, especially in the larger urban areas, people and local politicians have complained that too many arcades and betting shops have sprung up in city centre locations and that they are devaluing the cityscape,” Scholz explains. “In many places, this is a major issue in local politics, also among the population. At first glance, minimum distances promise a quick solution to this problem.

“But those who advocate minimum distances are overlooking the legal issues associated with such massive interventions in the freedom of occupation and establishment,” he adds. “Furthermore, the channelisation mandate of licensed betting shops – to channel the demand in the population for gambling offers into the legal market – is ignored, too.”

The association is therefore proposing an alternative that focuses on qualitative licensing, to drive the “dubious” and illegal providers out of business, but to retain those that can meet stringent requirements.

“In the end, from a player protection perspective it is not important how many metres there are between two betting shops, but that first-class player and youth protection takes place in both,” Scholz says.

And while the 2012 Glücksspielstaatsvertrag, and the forthcoming GlüNeuRStV, do not directly regulate land-based betting shops, there is a requirement for retail operators to secure a licence to continue their activity in Germany. Furthermore, they are required to connect to the country’s centralised self-exclusion system, OASIS.

By allowing players to self-exclude from all forms of gambling across all channels, Scholz points out that this fundamentally improves player protection measures in the retail market.

“[State] parliaments should keep this in mind before shops are closed unnecessarily for symbolic reasons and jobs are cut,” he says.

But with retail regulation handled by each of the 16 state governments, this means industry lobbyists are having to interact and work with 16 different coalition governments from across the political spectrum.

This makes lobbying efforts “very small-scale, time-consuming and exhausting”, Scholz admits, and each government’s reaction to industry arguments differs widely. Larger states, such as Nordrhein-Westfalen and Hesse, have been more receptive to calls for qualitative, rather than quantitative, controls.

Scholz also notes that some states are adding protective clauses for existing betting shops. Under these scenarios, the minimum distance requirements only affect new openings, rather than the existing market.

Ultimately, he adds, that’s the best case scenario for the industry: “We are fighting to ensure that the existing betting shops of reliable operators do not have to close due to minimum distances.

“The approximately 5,000 to 6,000 betting shops of licensed operators are reliable and have created around 25,000 jobs,” Scholz says. “These jobs must be preserved and the economic existence of the operators must be secured.”

But securing these jobs, at a time when the German government is yet to announce a clear path out of lockdown, remains massively uncertain. And with the sports betting licensing process stalling, operators cannot offset their retail declines with online gains.

While 2020 hinted at a new dawn for Germany’s sports betting market, after almost a decade of false starts, the situation is once again looking horribly familiar.