Part two sees Josephine Watson diving deeper into AI/ML, the role of regulatory intervention in driving uptake and the impact of the pandemic. 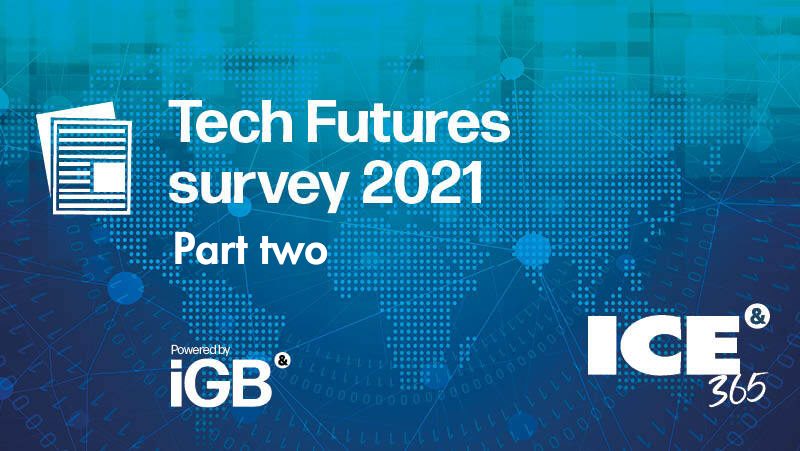 Read part one of the Tech Futures Survey here.

As two of the greatest areas of interest in disruptive technology from 2020, we added more emphasis to questions surrounding AI/ML and blockchain in our 2021 survey.

While following a similar trend, worth noting is the wider margin between the two leading examples, seemingly spurred by an increase in the applicability for other use cases.

One startup highlighted by a respondent as intriguing for its capabilities was Luka, an AI-driven companion chatbot which could offer exciting opportunities for a more personal approach.

One highlight from last year’s survey we expanded upon this year were ethical concerns around the use of AI in online gambling.

We asked respondents to outline the challenges they feel it may face here, and while 36.53% of respondents cited no ethical concerns, a variety of points were raised.

The greatest apprehension, understandably, surrounded its relationship with responsible gambling, with 21.15% of respondents registering their unease.

Of the various concerns raised, one respondent said: “[My disquiet is] around responsible gambling and how AI could be used to drive lifetime value the wrong way – this is the human element, however, not the tech.” This was a sentiment echoed by a number of respondents.

As part of the panel on our inaugural Futures Survey webinar in February, Four Wood Capital’s Lauren Seiler commented: “I think that at this point, you’d like to see the rosy side of things, but this isn’t an industry that has the greatest rep out there. If we start to use this technology and take things a little too far, it’s going to make things significantly worse.”

She added that players newer to the online space raise even greater ethical concerns: do they know that they are speaking to a bot, not a person? Do they understand their behaviour is being tracked to personalise their experience?

“Then you’re going to have the regulatory environment clamp down even harder than it might need to, so I do think that there is a certain level on not only the operators but also the regulators and everyone to not take that too far.”

Additionally, 13.46% of respondents expressed concerns around data privacy: how AI will process personal data, who is responsible for the data collected and how the technology “may connect dots that are not relevant”.

In addition to these areas, concerns were raised about consumer education, the security of the technology and its sustainability in the face of ever-changing regulatory regimes.

Another webinar panellist, Julian Buhagiar, co-founder of RB Capital, told the audience that he sees two sides to the conversation around AI/ML: “The first is the positive benefits – where can AI/ML help. There’s certainly KYC, which is a specific problem that can easily be solved by throwing more computing power at it. Data privacy and the extent to which it is used from a legislative perspective is quite important. AI, if misused, is a serious threat that we need to understand.”

As one respondent quite rightly highlighted, and as addressed in our 2020 report, we are still a long way from the kind of AI that is being discussed by some respondents.

Indeed, many conversations around the technology failed to distinguish between artificial narrow intelligence (ANI) – technology that is currently available in the form of machine learning – and yet-to-be-achieved more conceptual developments such as artificial general intelligence (defined as human-level) or artificial super intelligence (surpassing human capabilities).

Adopting disruptive tech
When it comes to the nuts and bolts of adopting these technologies, another question we raised this year was who bears the burden of responsibility for driving the industry forward? Indeed, all of the technologies mentioned are not “future technologies” in so far as they don’t yet exist, only that they have the potential to reshape the industry – and perhaps the world – as a whole.

When we asked our respondents for their perspective on regulatory intervention to drive new technology uptake, 40% strongly agreed that regulators have a responsibility to both monitor and encourage development, with a further 38.82% somewhat agreeing. About 7% either somewhat disagreed or strongly disagreed, and 14.12% neither agreed nor disagreed.

This topic in particular was discussed at length during the webinar, with varying degrees of support from our panel. Buhagiar bemoaned the “draconian” nature of this type of intervention. “Regulation is bad – simple. The way it’s done is bad,” he said. “Now, players have no choice but to be driven underground to look for their fix, and that’s a big issue.

“Part of it is the operator’s fault because nobody lobbied up as well as they could have, and we’ll only see the effects of this in 3-4 years.”

He sees the current interaction between tech and regulation as limited at best: “Technology hasn’t helped, [for example] what regulation has done with IP blocking, making sure that only specific things are done in a specific event. AI could have given insight. For all the things it doesn’t do, the thing it does right is predictions.”

Seiler had a slightly more sympathetic perspective based on her experience in the US: “Legislators and regulators have the best of intentions in mind, but it’s almost monopolistic. It can starve innovation to a certain degree, and there’s not an understanding of technology and the good it can do.

“There’s always a focus on the harm it can do. If you want to drive tax revenues, attract players from the grey or black market, you’re dealing with already very thin margins, particularly in sports betting. Why would a good player transition from the grey market into the white market if you can’t give them a competitive project because you’ve regulated the bejesus out of it.”

From his experience in Europe, Marcel Tobler, chief strategy officer at Grand Casino Baden, added: “Regulation is very often not based on a logical level, it’s based on politics – what politicians have an opinion on at that moment. Specifically with the pandemic, people became more aware that there are risks in online gambling, and some people when they worked from home or did not work at all got into trouble as they didn’t have a way to control their online gambling behaviour.

“We felt that this had an impact on how regulation is viewed by the regulator and the pressure increased.”

And while he did see hope in fostering innovation through relationship-building with regulators, “the big challenge is how to explain to a regulator how the new technology can help. We have to be able to explain what this kind of technology honestly will bring as an added value to regulation, player protection and tax revenue.”

This reflects a slightly stronger sentiment when compared to last year when only 70.06% overall agreed and 15.10% overall disagreed.

One respondent added: “Operators are always limited by regulatory constraints and to use new disruptive technologies these should be embraced by the regulators in parallel.”

Indeed, recent newsflow suggests that regulators in markets such as Great Britain and France are looking to become more attuned to new tech and solutions to future-proof their operations.

While some technologies have been integrated to an extent into igaming operations, such as AI for sports betting and minimal VR/AR experiences, the jury was still out for our respondents as to whether the industry is good at adopting and fully utilising disruptive technologies, with the majority (35.29%) neither agreeing nor disagreeing with this statement.

However, one question around which respondents demonstrated slight more consensus was the role of Covid-19 in demonstrating the need for disruptive technology. While once again the majority (40%) neither agreed nor disagreed with this sentiment, 22.35% strongly agreed and 30.59% somewhat agreed, with only 7.06% somewhat disagreeing and not one respondent strongly disagreeing.

Throughout the webinar session, the panellists expressed similar sentiments to the audience. Tobler said: “For me, this pandemic has shown that in many cases, we don’t need this highly advanced technology. Many companies are just missing easy-to-use tools to help them to work remotely, and in a more automated way.”

While we’ve seen some progress a year on, it is apparent that there is still much to be done to educate and facilitate development across the sector. As one respondent said: “Gaming is years behind the curve here and the existing tech stacks are not exactly compliant with new technology. It is going to be new and independent tech that drives the industry forwards, not the incumbents.”

Indeed, the responses from our survey highlight hugely varied perceptions of how far along the adoption curve igaming is compared to other sectors, some positing that these technologies remain underdeveloped and that we are light years from their use, others expressing impatience at their limited usage thus far.

One thing is clear: there is much to be done to educate both the industry and its consumers ahead of mass rollouts. It’s yet to be seen how disruptive technology will shape the industry, but we can be certain that the next phase of igaming will be bright.