We’ve launched our fourth survey into the Most Influential Women in the industry and we want your nominations. 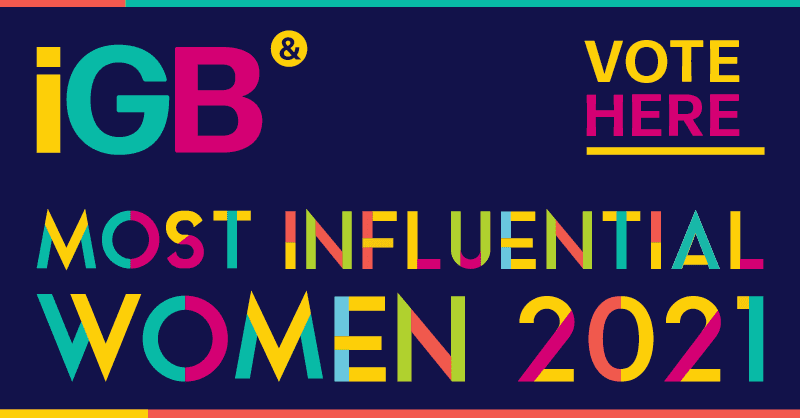 After the dire warnings last year about the disproportionate impact of Covid-19 on working women, particularly those in senior positions, the gambling industry started 2021 on a perhaps unexpected high.

In January came the news that Entain had appointed Jette Nygaard-Andersen as its new chief executive, marking the first female CEO for a major UK-listed gaming company.

Other notable C-suite appointments this year have included Zoe Osmond, who has big shoes to fill in taking over from Marc Etches as CEO of GambleAware, Noorul-ain Khan, who joined iSoftBet as its chief financial officer and Lynn S. McCreary, who took on the chief legal officer role at Sportradar.

Gaming companies have also been increasingly adding women to their boards this year, with Bragg Gaming Group adding one of last year’s Most Influential Women, Lara Falzon, to its board in February, a month before she was appointed CFO at SK365.

Flutter then announced in June that non-executive director Mary Turner would head up a new Workforce Engagement Committee, a challenging brief given the issues thrown up by the pandemic and the company’s 14,000 strong global workforce.

All of these appointments were, of course, welcome news, but particularly given some of these women came from outside the industry, it’s just as important to consider whether or not the igaming industry is working hard enough to develop the talent it has within its own ranks.

On this front, there have been some positive developments this year. For example, William Hill’s charitable foundation announced a programme to help progress the careers of women in technology within the industry. Similarly, in March Entain pledged donations to programmes aimed at bringing young women into the technology industry, in recognition of the long-standing lack of women working in tech roles.

Entain also has a number of internal programmes aimed at advancing women through the ranks, and the company’s head of ESG Jay Dossetter says Nygaard-Andersen’s appointment is likely to accelerate developments in this area further.

“We run a women in management programme that is specifically focused on providing opportunities for our female leaders within the business. It provides a structured approach with a three-year roadmap. One of the things that Jette has highlighted since she took over as CEO is that she is very keen that we mentor senior women within the business so that we really give not just tacit support but really active support to develop women’s careers.”

Another of last year’s Most Influential Women, Maris Bonello, says Kindred is also running a number of programmes to help the company move towards a better gender balance at the highest levels of the company.

“We have created a women’s network in order to develop internal talent and also taken certain steps in the recruitment area as well in terms of weighting and targeting and challenging the unconscious bias in the organisation.

“We have also recently recruited for our graduate programme, which is 35% female, which is quite amazing. Also Britt Boeskov, our CXO, will be leading a steering group made up of women’s network members to keep it at the forefront of the board’s minds and we are looking at more initiatives such as confidence coaching mentorships to also embed this equality aspect.”

But despite many other companies also running similar schemes, the industry is still a long way from gender equality – gender pay gaps persist and in most companies there are still significantly more men than women at both board and C-level.

This makes it all the more important that we again shine a spotlight on those women who are having a significant influence on our industry.

In 2018 iGB launched the Most Influential Women survey in a bid to redress the gender imbalance in the industry.

After a gradual rise in entries over the first two years, nominations soared last year, with hundreds of industry insiders nominating a large number of successful women, making its especially tough for our panel of judges to whittle entries down to the final list of 10.

Last year’s full list can be found in Part 1, Part 2 and Part 3 of our Most Influential Women features published last November.

We’re now opening up nominations for our fourth survey, the results of which will be revealed on iGB later in the year.

To nominate someone, simply fill in the survey here and tell us about their most notable achievements. Nominees must be either working within the igaming industry, or working in a position that has significantly influenced the sector.

There are certainly no shortage of contenders this year and some of the board and C-suite appointments mentioned above certainly deserve to be in the mix.

But one doesn’t need to be newly appointed to a post to be influential and in fact it’s often a couple of years into a post that one’s influence becomes most apparent.

For example, Virginia McDowell was appointed to Entain’s board back in 2018 and is now chair of the ESG committee, an area of business that has become increasingly important to the gaming industry.

In Sweden, director general of Sweden’s gambling regulator Spelinspektionen Camilla Rosenberg continues to feature heavily in the news given the country’s tough stance on gambling during the crisis.

In France, Isabelle Falque-Pierrotin is now close to a year in her post as the chair of Autorité Nationale des Jeux, a huge role given the transformational changes that have taken place over the past year in the country.

Speaking of transformational changes, Janny Wierda, director of security and responsible gaming at Holland Casino, is undoubtedly playing a major role as the company prepares to go online when the Dutch online gaming market opens up on October.

Europe’s other big newly regulated market, Germany, has a woman to thank for overseeing the sportsbook licensing process at RP Darmstadt. Martina Vogt was the only figure who was involved in the process from the very start, and she is also likely to have fed into federal licensing.

In the UK, as the battle for the fourth National Lottery licence heats up, women are playing key roles in more than one of the bids. Camilla Folladori, international business development director at Sisal, is heavily involved in the Italian firm’s bid, while former Nektan CEO Lucy Buckley is consulting for rival Sazka’s bid.

Also in the UK, Brigid Simmonds, chair of the Betting and Gaming Council, has had her work cut out of late as a key spokesperson for the UK industry at a time when a large-scale review of the Gambling Act is under way.

Simmonds featured on last year’s runners-up list, as did Daniela Johansson, deputy CEO and chief responsibility officer of Paf, and Ciara Nic Liam, director of product – gaming at Betsson, both of whom iGB caught up with earlier this year for our predictions features.

Stateside, Lauren Seiler has taken on the investor relations brief at Rush Street Interactive, after 17 years on Wall Street, 12 of which were focused largely on gaming.

And Rebecca Hargrove not only oversaw the successful launch of sports betting in Tennessee in her role as president and chief executive of the Tennessee Education Lottery late last year, she is also president of the World Lottery Association and chairs the Women’s Initiative in Lottery Leadership.

The above suggestions are just the tip of the iceberg and there are certainly many other women who deserve to be nominated this year. If you have someone in mind, start nominating now!